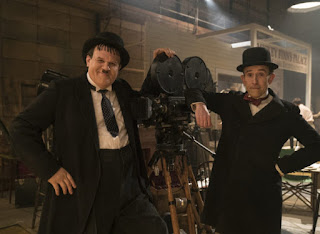 What can one write about when the film you have just watched pushed every button in the correct order and to absolute perfection? I have to admit that I imagined it would have been a lot more comedic and slapstick than it was. I was ready to belly laugh at the recreations of famous sketches from their long film partnership. However, those moments were fleeting and perfectly placed. Instead I watched a very real, tender, gentle, and simply lovely portrayal of Messrs Laurel and Hardy in their years after Hollywood fame.

Based very much on fact, and very informative, this film shows you an ageing and not too healthy pair travel to England to do a theatre tour starting in 1953 in Newcastle. They are too old really to be able to recreate their cinematic magic, and until they start doing public appearances and charity work, their audiences are very scant too. They are also over here to try and clinch a film deal, a script based on Robin Hood written by Laurel.

Steve Coogan (Laurel) and John C Reilly (Hardy) are utterly flawless. Their gestures, behaviours, etc just as I remember their actual alter-egos, and their nuanced performances show a depth of insight rarely seen on screen. It's what the dialogue doesn't say, but the cinematography does, which really clinches this film for me. What is said is just the right amount, and here we have a script writer, Jeff Pope, who really knows his business; and then taken to another level by director Jon S Baird. It's a glance, a slight touching of hands, a nod, nothing more, and these simple things speak volumes.

Also, quite surprisingly, a lot of the comedy comes not from Laurel and Hardy, but from their respective wives ("two double acts for the price of one") and these roles are portrayed to perfection and with relish from Shirley Henderson and Nina Arianda.

Stan And Ollie is a love story. A love story of one of Hollywood's greatest ever partnerships and the film follows them from the height of their fame to what turns out to be their swansong. I had tears in my eyes several times during this film - not from hysterical laughter (although their routines when re-enacted were superb carbon copies and simply amazing!) but because this bitter-sweet tale hits you right in the gut, and doesn't let you go. Not even in the final reel.

This is a masterpiece of biopic cinema, and whether or not you have watched any the original Laurel And Hardy films (and who hasn't???) this film will tell you all you need to know about one of comedy's most enduring double-acts ever. I simply cannot praise this film highly enough... so just go and watch it and you'll understand why!

"Je ne regrette rien, and you shouldn't regret rien either!"