REVIEW: Is It Ever Okay To Be A Xenophobe? (film) - Little Shadow Theatre on Youtube 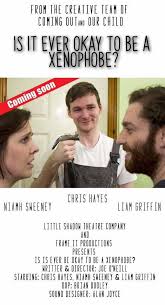 This is an 8 minute short film produced by Little Shadow Theatre, a company I saw perform for the first time this last July at the Greater Manchester Fringe Festival. I watched the film shortly afterwards, and came across it again today just by sheer chance, and since I like the film very much, thought I might just write a few words about it here.

I'm not going to give a way the plot or the ending - the film is so short and so delightful that would be a grave error - best if you simply find the film on Youtube yourselves and enjoy 8 minutes worth of dark humour.

Directed by writer, Joe O'Neill, it is, on the surface, a very simple and  heart-warming tale of a foreign manual worker, only able to communicate with 'okay-dokay', being given the chance of work in an Irish household. Chris Hayes plays Pavel, with an almost alien / robotic menace to him which automatically signals to the viewer that all is not what it appears to be; whilst bickering couple Paul (Liam Griffin) and Sarah (Niamh Sweeney) are pushed further apart and their relationship is strained to almost breaking point by Pavel's presence, despite him being there only a couple of days. It might only be a short, but this is a scenario which could work well if adapted and lengthened into a feature perhaps. At the moment it is a darkish comedy with a punchline which is more comedic than sinister; however as a feature I imagine it being much darker, perhaps even a horror film with a much more poignant and thought-provoking ending.

Little Shadow Theatre's Fringe theatre offering was also a series of short sketches and playlets, and so I really would be interested in seeing something more substantial from this Irish-based company.

The film can be viewed here - https://www.youtube.com/watch?v=8rZskSHbC7U&feature=youtu.be