REVIEW: Learning To Swim On An Ironing Board - HOME, Manchester 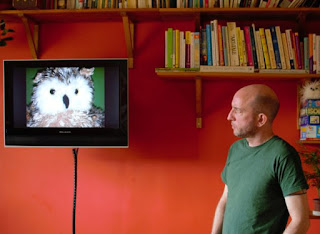 'Learning How To Swim On An Ironing Board' is a new piece of work commissioned by Home for the Push Festival 2019; a two week celebration of North West creative talents.


Conor A is a spoken word artist with fibromyalgia and is telling his story of ‘getting better at getting better’ in this one man show. Fibromyalgia is a chronic pain condition that can be triggered by physically and emotionally stressful events. There is some treatment to improve quality of life but there is no cure.

Conor starts his show with a very free and funny conversation with the audience and the houselights stay up as he lets people ‘warm up to his accent’. He talks about the uncertainty a mix of empathy and humour can cause an audience and encourages us to laugh. And there are plenty of laughs to be had. Then we jump straight into what is the cornerstone of the show; his adventures as an ‘eavesdropping hobbyist’, as seen in the ‘Overheard in Arndale’ social media accounts. He guides us through a rather romanticised day-in-the-life of an eavesdropper, taking us into Manchester’s Arndale Centre with his energetic, physical and hilarious prose. There’s a lovely touch of poetry to his delivery; it’s the ‘serious poetry that doesn’t rhyme’ but instead has ingenious alliteration and a pleasing flow. Hints of his past life as a performance poet. His lyrical descriptions, and indeed the rest of the show, are then punctuated with some of his overheard tidbits.

Sprinkled between the overheard phrases are autobiographical stories. Conor talks about his start as a performance poet, his diagnosis, his discovery of improv, his therapy and his cautious return to the stage. The eavesdropping is therapist-approved by the way, and Terry (the therapist) makes an appearance in the form of a toy owl in a series of pre-recorded videos where he talks about Conor, emotional growth and also takes part in an dramatic reconstruction of one of their sessions. These are moments in the show where the content becomes a little heavier but Conor still manages to present it all with humour and a charming self-awareness. His decision to take his condition with joy is reflected in the overwhelming laughter his performance provokes.

Conor has created a fantastically entertaining hour; educational, funny, serious and always with warmth and light. And, rather brilliantly, he has also worked his ‘reasonable adjustments’ into the structure of the show in way that adds enjoyment to the detriment of nothing and no one.

I hope that Conor A is willing and able to continue creating shows like this. He has a talent for comedy and a flair for performance that I would love to see again.