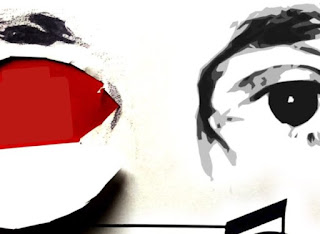 As part of this year's Push Festival, Home have invited a local amateur theatre group, Dorma, to present their version of the Persian fable, Eye For An Eye. The production was performed in Farsi (the English translation on surtitles - but sadly hardly ever on cue and the wrong sentences showing at the wrong times, as well as other technical difficulties with the titling). It would have helped enormously to have had a programme sheet with some information on for this performance, since it was both culturally and linguistically far removed from what audiences are used to experiencing.

The story concerned a Persian King, whose idea of meting out justice was to appease one person whose eye has been gauged out by finding some worthless peasant and gauging their eye out. The story took the form of a parable inasmuch as the young man wanting justice blamed a witch who hit him with a rod, who in turn blamed the seller of the rod, who in turn blamed the blacksmith for forging the rod, and he then passed the blame over to the court gardener (I am uncertain how), and he passed the buck to the flautist who eventually and finally did have his eye taken from him rather gruesomely. However, where this story falls down is that unlike a tradition parable, there seemed to be no moral or satisfactory ending. The cast stood at the front of the stage questioning whether or not this was real justice, and then together sang what I assumed to be a traditional folk song accompanied on a traditional guitar-like instrument (a Tar?). The native speakers in the audience knew this song and joined in with them.

The play was excessively slow and drawn out. Running at 70 minutes, it could easily have been told in half that time and been the better for doing so. Over-emphasised and stylised walking and freezing between scenes and traditional music to accompany the thought processes dragged the production as well as a lack of pace / urgency from any of the cast. Perhaps this is the accepted performance style in their culture. Certainly the style of acting was one which to a British audience could be described as 'pantomimic' or perhaps even 'hammy'.- yet again, I am assuming that this style was traditional to the culture of origin. I found the costuming a little odd too. I am assuming that since the story is an ancient one and concerns a Persian King, then a few of the costumes worn showed a semblance of authenticity; but majority of the costumes were modern track suits, trainers and t-shirts, and I found this mix (perhaps a deliberate idea to de-specify the era by director Ali Aminipour) bizarre, and rather than blend to find a common ground, they just reacted against each other like two similar-poled magnets pushing apart.

The cast had obviously invested a lot into this production and that should not go unacknowledged. It was an interesting and definitely different piece which was well received by an audience composed of majority family and friends and fellow Farsi speakers.