NEWS: Raymond Gubbay celebrates 25 years in the business with special series of Christmas concerts throughout the UK. 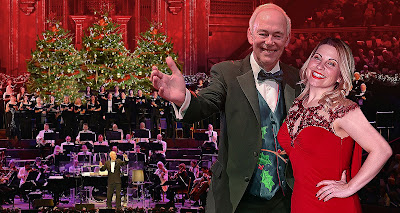 Raymond Gubbay Limited is celebrating over 25 years of presenting brilliant season entertainment in 2019, with an incredible line up of Christmas Festivals in London, Manchester, Glasgow, and Birmingham including some iconic favourites – which have become UK festive institutions – and some exciting new concerts for 2019.
Highlights of the new concerts for 2019 are:

NOW THAT’S WHAT I CALL CHRISTMAS LIVE! - The biggest selling festive album of all time – LIVE ON STAGE! With guest singers Kerry Ellis and Tim Howar, John Rigby conducting and a 15-piece show band, audiences will be able to sing along to iconic Christmas classics including All I Want For Christmas Is You, Merry Christmas Everybody, Last Christmas,  Rockin’ Around The Christmas Tree, and many more…

THE GREATEST SHOWTUNES – celebrating the best of the West End and movie musicals, this show stopping concert is packed full of the greatest show tunes. Conducted by Richard Balcombe, and performed live on stage with special guest performers Sophie Evans, Ben Forster, Marisha Wallace and Ricardo Alfonso, all direct from the West End, with numbers from The Greatest Showman, Mamma Mia!, Joseph and the Amazing Technicolor Dreamcoat, Dreamgirls, The Phantom of the Opera, 9 to 5, La La Land and Jesus Christ Superstar.

CHRISTMAS CRACKER WITH ALED JONES – Aled presents a wonderful concert of seasonal classics, festive readings and joyful song, all crowned by a selection of favourite carols for all. Conducted by Adrian Lucas with soprano Jennifer France, songs include Willcocks’ Jingle Bells, Cullen’s Joy to the world, Rutter’s The Angels Carol, Blake’s Walking in the Air, and many more, plus carols for all.

Classic favourites include:
CHRISTMAS CAROL SINGALONG – This festive favourite has been raising the roof at the Royal Albert Hall for over 20 years and is now being presented at the Barbican in London and around the country. With guest singer Louise Dearman and irrepressible showman Jonathan Cohen presenting and conducting, audiences will be able to sing along to this fun-filled jamboree of his most-loved carols and all time Christmas hits, including Jingle Bells, Frosty the Snowman, Merry Christmas Everybody , Santa Claus is Coming to Town, and classic carols for all.

CAROLS BY CANDLELIGHT - With soprano Susanna Hurrell and Steven Devine conducting the Mozart Festival Chorus and Mozart Festival Orchestra, audiences can enjoy a sublime concert, staged in full 18th Century period costume in an evocative candle-lit style setting, of carols and seasonal classics, such as Cullen’s Joy to the World, the Christmas Sequence from Handel’s Messiah, Bach’s Air on the G String, Ledger’s Sussex Carol, and Darke’s In the Bleak Midwinter, plus carols Good King Wenceslas, Once in royal David’s City, While shepherds watched their flocks, O come, all ye faithful and Hark! the herald angels sing.