NEWS: Cast announced for Jack And The Beanstalk at Theatre Peckham this December. 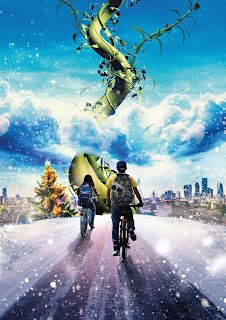 Casting Announcement - Jack And The Beanstalk
By Paul Sirett

• Michael Bertenshaw has been cast alongside Yinka Williams, Tamara McKoy-Patterson, Michael Gonsalves, Kitty Hollingsworth and Luis Gustavo Silva Navarro in Paul Sirett’s production of Jack And The Beanstalk at Theatre Peckham this Christmas.

Olivier-nominated and award-winning playwright Paul Sirett (REASONS TO BE CHEERFUL, THE BIG LIFE, RAT PAT CONFIDENTIAL) imagines one of the most treasured and classic children’s fairytale’s Jack And The Beanstalk in this updated production with music composed by Wayne Nunes and Perry Melius, staged at Theatre Peckham and directed by Suzann McLean.

Fee-Fi-Fo-Fum, mysterious things are happening around Peckham.
In the street where Jack lives there have been a series of break-ins. Even aspiring young detective Lucy is finding it hard to follow the clues. All is lost for Jack and his Mum until  mystical rapper Shot the Poet sets the adventure in motion with a bag of magical beans…

This festive pantomime is a wonderful coming of age tale where Jack learns to make up for the mistakes he has made and strives to do good for his family. Set in inner-city London this play channels influences from the electric 80s and takes inspiration from the teen adventure movies of the era. The cast includes a mix of students from Theatre Peckham’s Academy as well as professional actors. Michael Bertenshaw who was cast in the 2012 version of the play at Theatre Royal Stratford East, reprises his role as the Dame. Meet new character, Shot the Poet, a local spoken word artist and enter a world where adults learn from the much wiser child characters.

Suzann McLean comments: “Christmas shows are often the first introduction for a child to theatre. In our Theatre Peckham productions we have the added magic of having young actors playing lead roles. This inspires young audiences to know that theatre is truly inclusive and that they too can reach their ambition to perform on a professional stage.”

Theatre Peckham is a pioneering Learning Theatre for young people since 1986, home to world class creative learning and performance, providing a talent pool for the creative industries.  At the heart of Theatre Peckham's success is its commitment to diversity and inclusivity.