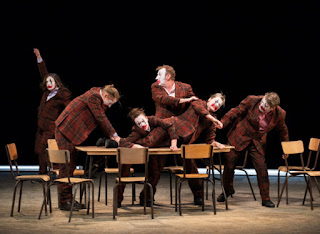 After being temporarily discombobulated by this performance having the same title as a famous Ray Cooney farce, and momentarily thinking it might be that farce, I can assure you that this evening's production by Forced Entertainment is just about as far removed from the Cooney script as it is possible to get.

The pretext - or perhaps even context - of this show was that they were to sit down to have a meeting / discussion of sorts, but none could agree and were constantly quarrelling and fighting each other. This led on to other aspects of clowning bringing out some of the lesser desirable qualities of humankind: the desire to be the same and fit in, the desire to be different and stand out, loneliness, acceptance, but above all the desire to be noticed and acknowledged.

There were moments of genius in Tim Etchells' directing, but sadly only moments. The vast majority was very samey, bland, repetitive. However, on reflection I have the distinct feeling that it was meant to be this way in order for our own quotidian mundanity to have any relevance. The most poignant moments for me were when one of the troupe (always the same man) would be last, or the slowest to catch on, and not want to be left out or left behind.

Dressed identically in deep red tartan suits and quasi-clownlike white make-up, they are both individal and anonymous, as indeed, we are ourselves. It was an interesting experiment to see a refelction of our own lives played out in pantomime on stage: watching those moments of silliness and high jinx juxtaposed with moments of stillness and nothing. For me though, I found it just a little too monotonous and long. If more comic capers had been included, it would have altered the focus of the show, but it would have been more entertaining.