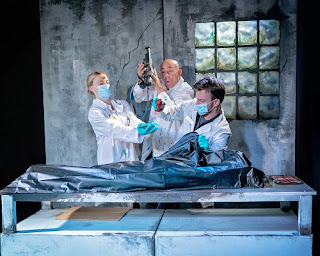 In this modern retelling of Robert Louis Stevenson’s gothic spine chiller, Thunder Road Theatre drags the gruesome tale kicking, screaming and rocking out to the sounds of '80s & '90s indie nostalgia into the 21st century. Transplanting the action to the supposedly disease-ridden ghost town of Inglenook, in rural Yorkshire, here follows the journey of music-loving scientist Robert Fettes; having been persuaded by a mysterious letter - from an even more mysterious stranger - to join a cutting edge laboratory, the stage should now be set for dastardly doings (note to self; burn all mysterious letters). However, having braved the terrible food, boarding, and strange inhabitants of his new hometown, he now hopes to dissect his way to a possible plague-cure breakthrough and, despite the bumpy start perhaps it could. But no matter how loud the music, or damn catchy, something just doesn’t feel quite right…..

Set in a suitably grimy lab-cell, the backdrop was cleverly adapted for each scene with the use of a single platform turned sofa turned lab-top slab. With comic presence in the multi-rolling forms of the most excellent Elizabeth Hope and Zach Lee, silly walks and ninja strikes lent comic relief to the dark circumstances and were brilliantly inter-spliced with dreadful glimpses of the fear-inspiring Body Snatcher. Larger than life caricature Mrs. George, the pub landlady, was an extra-special treat to watch, a universally recognisable breed of lady that can be found in any small village, with her outlandish outbursts and humorous observations.

Ian Townsend’s protagonist was a well-thought out and relatable character, and combined with actor Alex Moran’s natural and open portrayal, really amplified the tension making Fette’s inevitable descent even more compelling to watch as he steps closer and closer into the centre of a nightmare.

With a mixture of soundtracks featuring the likes of Iggy Pop, to live vocals from Fette’s singer/song-writer wife, there were some surprisingly easy-going moments mixed in amongst the doom-laden atmosphere which were a lovely reminder that even on the worst days music can make life a little more liveable - even when you’re sleep deprived, overworked and cutting up a possible murder victim in the middle of a plague and there’s a killer on the loose.

I won’t spoil the ending but say that some elements (such as the nature of the disease) were vaguely eluded to but never completely examined and this was in equal parts frustrating (everyone enjoys a big reveal) and parts tantalising with an atmosphere of fear played out to the very end even once the true culprits had been identified.

If you fancy a chill-filled evening that’s neither straight horror nor comedy nor mystery nor musical but a theatrical hodgepodge of goodness this is an easy pleaser to watch. For best results grab your gas mask, trainers, and leave the little ones at home.