INTERVIEW: With the cast of children's touring production of Gruffalo's Child coming to Salford this Christmas! 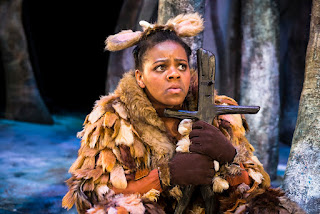 Prior to the arrival of children's favourite The Gruffalo's Child at Salford's Lowry Theatre in december, here is an interview with the touring cast about this family show!

WHO DO YOU PLAY IN THE GRUFFALO’S CHILD AND WHAT ATTRACTED YOU TO THE CHARACTER?

ALTHEA: I play the Gruffalo's Child. I was attracted to the role because she reminds me a lot of the child that I wished I could be when I was younger! She's so cheeky and daring! I wish I had a bit more of the courage that she has!
JACK: I play the Gruffalo (the Gruffalo’s Child’s Dad) and Predators. I love the dancing and the frequent costume changes I get to do as the Snake, Owl and Fox!
GEORGIA: I play the character of Mouse and love the character’s wit, spirit and bravery – even if she takes a little while to find it!


WHAT IS YOUR FAVOURITE PART OF THE SHOW?

ALTHEA: That is a tricky one. When I'm playing mouse, I love to sing Mouse's song because I love how it shows another side to her, but when I am the Gruffalo’s Child my favourite song to perform is Fox's song because it's so jam packed, but then I love Stick With Me which is The Gruffalo's Child’s song. I think it is safe to say that I love all the songs!
JACK: When the Gruffalo's Child meets Mouse I get to sit backstage and sweat. I'm only joking. I really enjoy being Fox – he’s cheekier than I could get away with in real life so he's lots of fun to play.

GEORGIA: I suppose I’m biased but I love the Big Bad Mouse song! It’s powerful, gutsy and a lot of fun. You finally get to see Mouse’s true spirit. Part of what makes her so charming is that she doesn’t really realise her own strength, and in this song you see her slowly realising it.
THE GRUFFALO’S CHILD SHOWS HOW BRAVE SHE IS BY LEAVING HER CAVE, BUT WHAT IS THE BRAVEST THING YOU’VE EVER DONE?

JACK: I'm not very brave. I once walked The Inca Trail to Machu Picchu which is an ancient Inca Temple in Peru. You have to climb very high up and I got really sick when we were only halfway there, so had to keep walking for 3 more days. I'm not sure if that was brave or foolish but it was very hard!

ALTHEA: The bravest thing I've ever done is moving to Colchester in Essex to do my degree. Moving out of your parents' house is a big thing, but to move across the country away from all your friends and family is a whole different thing altogether (I am originally from Manchester). I'm very proud that I managed to stick it out and fend for myself.

GEORGIA: When I was 18, I went travelling for a month by myself. At the time I felt so grown up and brave, but it was the first time I'd left home and my family for more than a week and I was scared, though I daren't admit it. I remember walking through the airport gates, turning the corner and losing sight of my waving parents and thinking- ‘what on earth have you done?!’ I suppose that was my equivalent of leaving the Gruffalo's cave! I survived and had the time of my life, but returned home with my Mum’s favourite saying, ‘There’s no place like home’.

WHERE ARE YOU MOST EXCITED TO GO ON THE GRUFFALO’S CHILD TOUR?

ALTHEA: I'm really looking forward to going to all the places I've never been to before! I love a good adventure me! Obviously, I'm most excited to go to the best city in the world, my hometown Manchester, you can't beat your home comforts!

JACK:  It’s Belfast for me. I’ve never been to Northern Ireland before and it will be extra special as it’s my son Finn's 1st Birthday while we're there so him and his Mum are going to come too.


WHAT SHOULD FAMILIES EXPECT FROM THE SHOW?

ALTHEA: Families should expect to be taken on a wonderful journey of courage and discovery with the Gruffalo's Child. Be prepared to laugh out loud!

GEORGIA: To have their hearts warmed and their minds enchanted, with lots of laughter and a head full of songs you’ll be singing for a while! Trust me.