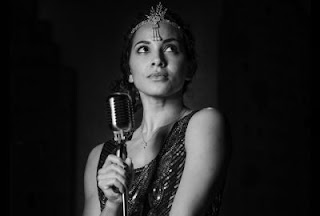 'Lady Of Jazz' is an original solo-performer Musical written by John Gleadhall and Greg Mosse, and tells the story of a fictional Mulatto jazz singer Honey Grey as she lives through the America of the 1920s and 1930s.. The Crash, The Despression, Sanctions, KKK, Prohibition, The Great Migration northwards of black people from the south, and with such emotive and tragic scenarios it could easily have become very heavy and heart-breaking, happily it never once became maudlin and introspective, but save from speaking about these issues, they were never really seemingly of any import either.

The character of Honey Grey was performed by Michaela Bennison, and her beauty and her youthfulness imbued a warmth and lightness across the audience, and as she so very genteelly and gracefully included us in her narrative, just as you would tell a bedtime story to a young child, it was impossible not to be brought into and lose yourself in her world. But what is her world? The play offers tantalising titbits, but offers no resolutions or answers. We are told about her classical composer-father who turned to jazz and it was his band she starred in, but nothing about his life as a Black American or why he married a white lady, and why there seems to be a lack of harmony between them now. We are told about her alcoholic mother and how she wanted her daughter to trade on her light skin for success, but little about her darker skinned younger sister who was passed off as her maid! Every 'issue' in fact that is brought up in the narrative is sugar-coated with a sweet smile and passed off as seemingly unimportant, and frustratingly we never do get to know much about Grey despite being in her company for 100 minutes or so. All we do learn is that she in insecure and perhaps also quite unhappy despite her sunny exterior, and that she "stays away from men". However the reason for this was never explained either.

In the first act, she sits backstage in her dressing room and chats candidly and sweetly, taking us through her life during the 1920s leading up to the flooding of the south forcing many blacks to venture further north and she and her family move all the way up to Chicago. This act features in the main, original songs, which in true muscial style, advance the narrative and reinforce character. They fit well, and Bennison's vocal abilities handle them with ease. Sitting to one side is Tony Pegler on a piano, portraying the silent role of Frankie Finch who accompanies Bennison throughout. It worked well. After the interval however and things had changed. The shorter second half saw her back in New Orleans on stage in concert, and the songs here were jazz standards which were given unique twists and interprestations by Bennison. Throughout this act she systematically took off jewelry and clothing accessories; I am uncertain why, unless perhaps it was a visiual metaphor for her wanting the world to see the real Grey, and not the performing singing star. It was also strange that the gin (water) which she frequently went to to drink was so far away from the mic and not lit. Again, this may well have been a visual metaphor, but if so, it wasn't a particularly strong and clear one.

It was a very enjoyable show, and Bennison is undoubtedly very talented, portraying a character which really suited her style of performance; but I found the narrative flimsy and insubstantial, and the lack of emotion irritating.