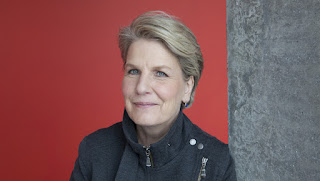 I doubt many of the readership will need an introduction to Sandi Toksvig, as she is now a very familiar and popular face on our TV screens, as one of the panel on 'The Great British Bake-Off' and host of QI. However, Toksvig is, in fact, a whole lot more than just this public persona, as she is always busying herself in some worthy project or other or wondering at the marvels (even the small ones) of the world around her. It is this passion for life, travel, and her surroundings that was one of the stimuli of her latest book, "Between The Stops", the book she was at the RNCM this evening to chat about and promote.

Toksvig is probably one of the most unstarry and un-celebrity-like celebrities there is, and as she takes the local bus from her home to the BBC studios in London; a route she has taken many times and is familiar, she has the chance to look at the places, the scenery, the architecture etc, that this 7,5 mile journey passes through, and as she gazes, she allows her mind to wander and these stimuli bring back memories and recollections as well as provide a few little-known facts along the way too. Her book then is an autobiography, but not in the conventional sense and with no lineal progression. It is more a book of memoirs and recollections, which will "set the record straight and tell the truth about the runours".

Danish-born, and US and British educated, Toksvig had a bit of a kickstart at the journey of life, before most of us ever had an opportunity. However, she was anything but sweet and innocent seemingly, as she, at just 6 years old, organised a strike in her school as she wanted to be able to play outside in the playground despite the rain, but girls were not allowed to do so, and she found this unfair! Taking us candidly and humorously through some of her anecdotes with interviewer Alex Clarke, the two things which became the most important and stressed subjects of the evening were her 'coming out' and how that impacted on her life and career, and her starting the Women's Equality Party; which is, she mused, the only political party which aims one day to be non-existent, as it will no longer be needed.

Toksvig talked with candour and humility in that very acidic self-deprecating comedic style she has made all her own, and in the 80 minutes she was with us, her caustic razor-sharp and intelligent wit took us through her school-life, her lesbianism, her first job in the theatre (lighting techie for J C Superstar!), reading human rights law at Cambridge, her first TV (the No 73 Show), and her political stance, as well as countless other subjects. At 61, she shows no signs of slowing down, and indeed her passion about all things, especially women's equality, was omnipresent, despite being the most down-to-earth, relaxed and earthed person I have ever seen interviewed

She called her book "a radical connection" and finished by saying that who we are is really important, and we mustn't change ourselves to suit the fashions of the day.  And now for a bourbon...!