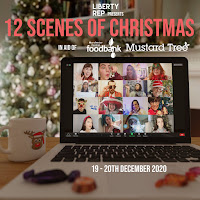 Liberty Rep is a Manchester-based company, who, during our uncertain times have like many, turned to online media to continue producing; but rather than charge virtual audiences to watch their show, they presented three live Zoom performances over this weekend all in aid of two local charities: The Manchester Central Foodbank, and Mustard Tree.
The show took the form of 12 short sketches, each worked and stood alone as a separate sketch, but very cleverly, as the sketches went on, it became clear that these were all interconnected and the characters in each were all related in some way, as we saw the same people in several sketches, thus building up a much fuller picture of the people we were watching and their relationships with other characters. This was very nicely done and it is something I have not seen before too, so huge kudos for this inspired idea.
Some of the sketches were  bitter-sweet or a little down-beat, which made a lovely contrast to the general overall mood of the piece as a whole, which was of course, comedy! We watch Eve as she calamitously tries online dating, and then meet her mum and her grandma as we go along, as well as their extended family, friends and choir buddies. Some sketches do work better than others, and obviously being totally subjective, there were a few I enjoyed more than others too. And so my personal favourites were to be found behind doors number 10 'Adam', and number 6 'First Christmas'.
The choir, who were disastrous and tuneless at the beginning, proved they all could sing well for, as the credits rolled, they all performed 'Silent Night'.
A lovely idea, raising awareness and hopefully much needed funds for local good causes, creating seasonal laughter by a group of kind-spirited, creative, and dynamic writers, performers and directors.
Reviewer - Matthew Dougall
on - 21/12/20
at December 22, 2020