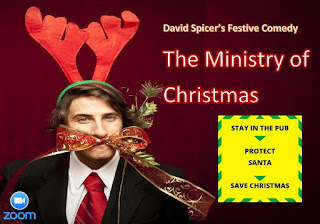 I’m sure this production has been in the pipeline for a while but it couldn’t be more timely with its premiere coinciding with the Prime Minister’s U-turn and change of plans for the Christmas period. This Zoom theatre production felt hot off the press. Packed into this Christmas stocking were political satire, one liners, and the question: what is the true meaning of Christmas today? Think of it as a theatrical version of “Spitting Image” on Zoom.

In what has been the most extraordinary year with the Government’s questionable handling of the Covid-19 pandemic, the Prime Minister in this story is going all out to make sure he gets Christmas right. The PM appoints a Minister For Christmas called Malcolm Skinner MP to lead on this work. Big promises are made: this Christmas is going to be “oven ready”, “world beating”, “world leading”, “strong and stable”, but “jolly careful”. Free festive jumpers and Christmas crackers for everybody. They’re “taking back control” of the fun right up until the New Year when everybody “continues to shake hands” during “Auld Lang Syne”. But, can these big promises be delivered?

David Spicer’s comedy contained political squabbling, points scoring, hilarious news captions, a multitude of metaphors, and a compilation of political quotes. The humour expressed the public’s exasperation over the handling of the real-life situation. Shaun Chambers’ direction encouraged the actors to ham it up and kept the play’s pace up. However, Zoom did create slow transitions between a couple of scenes. The familiar faces of the Northern Comedy Theatre were joined by new performers: Natasha Agarwal, Wendi Walker, Wendy Patterson, and Mikyla Jane Durkan. They all did a terrific job, especially the well cast Robert Stuart Hudson as Malcolm Skinner MP – playing a politically incorrect and bumbling buffoon.

From the common Zoom problems highlighted in the script, to the use of graphics, music and sound effects, this production referenced and made full use of Zoom. Consequently, it is one of my favourite shows from this company to date. The news interview exposing private sector contracts providing inadequate goods, improper answers to questions, and familiar phrases like “let me finish”, made you laugh-out-loud in a mirror image of real-life. The narrative made you wonder what really happens behind closed doors in these meetings about meetings about meetings.

Just to say that I did feel it ended quite abruptly; almost in a way like it had to end somewhere. All things considered, once again it was a load of fun and the dark humour made you chuckle. The company pulled out all the stops. Northern Comedy Theatre re-framed 2020 so the audience could perceive the funnier and the lighter side, because we all need the gift of comedy this Christmas to see us through the tough times. Well done again to all involved.