ARTICLE: A LITTLE LOOK BACK AT WONDERFUL THINGS FROM A TERRIBLE YEAR! 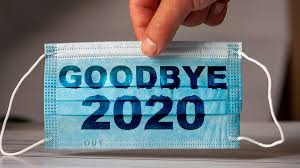 Normally around this time of year Number 9 would be giving you a run-down of the top 10 shows of the year and reviewers' highlights. It would normally be a celebration of all the Arts and a time to look back with fondness on the many wonderful shows, concerts, films, gigs, plays etc that the team have had the privilege and pleasure to watch and review.
So what to do this year? It really has been one Annus Horribilis hasn't it?!
Instead then, I thought I would share with you my own personal highlights of the year, in no particular order. The Arts have suffered greatly these last 10 months, and the new year doesn't bring us much hope, at least for the start of the year... and so I take my hat off to all those who had found ways around these challenging times, in order still to bring entertainment to the world, and find employment for the lucky few.
With this in mind, my first category is: "ONLINE INSPIRERS". Those companies who seem to have taken to the online streaming world like a duck to water and continued to produce excellent quality work in this medium, above and beyond. In this respect I would like to mention and thank: Encompass Productions (London), Tramp (London), and Northern Comedy Theatre (Manchester) for continuing to produce works of quality throughout the period and not be fazed by it all.
Thosed who know me will know that I am a huge fan of MUSICALS, (my second category), and so trying to find my favourite this year was an almost impossible task. I was fortunate enough to have seen the brilliant 'Back To The Future' Musical at Manchester's Opera House only a day before the lockdown started, and that was indeed incredible.
However, for the rest of my choices I must go online. And there were so many! Cirencester's Barn Theatre produced the chamber musical, 'Marry Me A Little' which was simply stunning, The Other Palace (London) provided us with the ingenius and hilarious 'Eugenius!"; York's Theatre Royal streamed their excellently staged, 'The Railway Children', Chichester Festival Theatre streamed their utterly superb production of 'Flowers For Mrs. Harris', and Colchester's Mercury Theatre allowed us to watch their truly excellent production of 'Pieces Of String'. All this whilst the amazing YouTube channel 'The Shows Must Go On' have been streaming musicals and musical concerts weekly (with a break in the middle) for various charitable causes. The two favourites from these have been 'Bandstand' and '42nd Street'.
With other theatrical genres, my personal favourites have been 'Newsies' (The Disney Channel), Red (Wyndham's Theatre, London), The Alvin Ailey Dance Theatre (Lincoln Center, USA), Scheherezade (Maryinsky Theatre, Moscow), and an online panto which I watched only yesterday,. 'The Panto That Nearly Never Was' (Theatr Clwyd).
I should also like to give a special mention to both The London Symphony Orchestra and The Royal Northern College of Music, who have continued and persevered with adversity and triumphed with superb and regular online content both live and recorded throughout.
But these are just my favourites out of a whole rainbow of excellent music concerts, films, plays, cabarets, etc, without which I would have been lost and mortified. Thank you from the bottom of my heart to everyone and anyone who has contributed to keeping the Arts alive and kicking throughout these difficult times, and here's hoping 2021 will bring back live entertainment with a (permanent) bang!