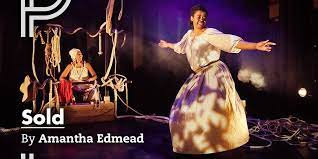 Two contrasting and very distinct shows: ‘Flushed’ and ‘Sold’ are both currently showing on the same nights at the wonderful, newly extended North London fringe space , Park Theatre.
‘Sold’ is a historical piece about one woman’s autobiographical account of her life, from being born into brutal slavery in Bermuda to documenting this exeprience and thus becoming a driving force for British anti-slavery: her book having “an electrifying effect on the abolitionist movement, helping to free many Africans in bondage.”

Told through an intoxicating mix of song, live drumming, dance and the West African tradition of ‘griot’ storytelling, these disciplines are brilliantly interwoven making for a seamless, expressive and at times very real depiction of Prince’s experiences. Superbly written by Amantha Edmead whose flawless, all-encompassing portrayal as Prince is a masterclass in integrated performance, this is a hugely enlightening and powerful piece as we follow her life’s traumas, from her being sold as a young child as a ‘plaything’ for the grand-daughter of a wealthy Captain, through a catalogue of horrific stages on her journey as a slave and the steps she ultimately takes to overcome this. Alongside Edmead, Angie ’Amra’ Anderson is the ever-present African drummer - giving accompaniment, edge and ironic humour to the piece, whilst majestically seated centre- stage behind a large, metal frame from which hangs a thick-rope noose:  a powerful symbolic backdrop.

Euton Daley’s direction and Lati Saka’s choreography are a visceral combination in making this a hugely exciting, unique production - with a hauntingly impactful set and lighting design created by Nomi Everall. With its repeated phrase of “to be free is very sweet” this is a reminder both of a history that must not be forgotten and many disturbing parallels that can be made now: both a vital contribution to Black British Theatre and well-deserving of the huge acclaim it has so far received. ‘Sold’ is, in short, a masterpiece that demands to be seen.   Reviewer - Georgina Elliott