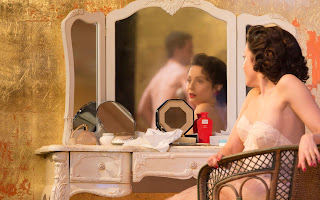 I first saw this play several years ago at the same theatre, so was keen to catch the latest tour of, arguably, Tennessee Williams’ most famous play.

Anthony Almeida takes the helm as director, offering an almost abstract, stripped-back interpretation of the text. Almeida’s recent work at London’s Almeida Theatre and his success at winning the RTST Sir Peter Hall Director Award in 2019 already created a buzz of expectation and intrigue for this touring production, which is produced in partnership with Liverpool Everyman & Playhouse and English Touring Theatre.

The bare, minimalist set consists of three raised walkways, with a circular curtain in the middle of the space. The opening scene is played predominantly with the curtain closed, perhaps suggesting how the discord and tension between married couple Maggie and Brick exists behind closed doors, away from the public eye where their façade of a blissful marriage can thrive, and inviting the audience to take a voyeuristic peek into their private misery. Unfortunately, the curtain remains closed for too long, invoking frustration, more than anything, that a clear shot of the cast can’t be seen. It also muffles the sound a bit which, again, is mildly annoying. Perhaps this is what is aimed for, but for me it didn’t work.

We learn that Brick and Maggie’s marriage is on the rocks. To paraphrase Maggie, they no longer live together, they just share the same cage. It’s not immediately clear what is going on between the pair, as Brick, laid up with a leg injury, broods and scowls from his rest-bed and Maggie slinks and purrs around the space, throwing scathing comments in her husband's direction one second then trying to seduce him the next. Oliver Johnstone’s Brick is cool and sullen, crushed by physical and emotional agony and his dependency on alcohol, he slowly sinks into a stupor as the play progresses, desperate for the ‘click’ of contentedness that alcohol brings him. Siena Kelly plays a pitiful figure as his frustrated wife, Maggie, the titular cat, who clings on to her marriage despite the increasing signs of its toxicity. Brick is no longer interested, but Maggie desperately wants him to love her and continue their pretense of a loving, ‘normal’ marriage.  Kelly and Johnstone share strong chemistry on stage and portray the rising anger, frustration and misery between the pair wonderfully. Johnstone’s conveying of Brick’s fragile masculinity, his guilt over the death of his friend and his inability to communicate his feelings without shame is particularly touching in equal parts. In a time where male suicide is at a high, Brick’s narrative thread hits the spot. There’s a very touching moment between Brick and his father, Big Daddy, towards the end of Act 1, where Big Daddy encourages his son to share his burden and open up, questioning why no-one talks anymore.

The snarling and sniping between Brick and Maggie is enveloped by a family party, celebrating the 65th birthday of patriarch Big Daddy, played by Peter Forbes. It’s Forbes that delivers the productions most powerful moment as he reacts to a devastating diagnosis which had been kept from him, just moments after we have seen him revel in hopeful plans for the future. The weight of this moment really hit heavily and it was hard not to sympathise with Big Daddy, however ignorant, misogynistic and grotesque his future plans may have been. To see the wind taken so cruelly out of his sails is a really tough watch.

The real star of the piece is William’s crackling script, which seethes with tension, distrust and desire for the impossible. Maggie wants the love of a husband who can’t stand her. Brick wants to re-live the past and escape his marriage. Big Daddy wants to live. Williams has a skill for exposing the humanity in his characters, often to heartbreaking ends, but he peppers his play with wit and humour which I don’t think was portrayed as strongly in this version. Yes, the brooding, the tension and the darkness of the play is emphasised well, but after a while it loses its punch and, like the ticking metronome that punctuates the play, it becomes monotonous. I think allowing the more light-hearted moments to rise to the fore more strongly would have made those dark and sombre moments all the more gut-wrenching.

There’s a key thread of mendacity throughout the play, which is even directly referenced by Big Daddy. All of the characters are lying, whether it’s to each other or themselves. The drama comes from each of the characters confronting those lies and, in most cases, it is heartbreaking to observe.

Although a good adaptation, I’m not sure the abstract presentation works in the story’s favour. Cast members wander on, pose for a bit, then drift off back into the shadows which distracts the audience from the main action more than anything else. Due to the minimal set and props, many important events happen without any physical signposting, leaving the audience to insinuate and use the text to derive what is going on. For example, the family gather round and discuss Big Daddy opening his birthday gifts without any gifts in sight. Big Momma has several conversations on the telephone whilst sitting serenely on a table with no phone or even representation of phone around. I’m not sure this would be clear for a first time viewer and it certainly makes the audience work for their experience.

Like Maggie, who doesn’t possess the attractive qualities she hints Brick found in his friend Skipper, is this piece just a victim of what came before? I found myself relying a lot on the previous version I’d seen to piece together what was happening before me. Perhaps the intension was a radical re-telling, stripping back any elaborate set pieces, props or costumes to really expose the themes of William’s tale and the humanity of its characters, but for me it didn’t quite do Williams’ script justice.