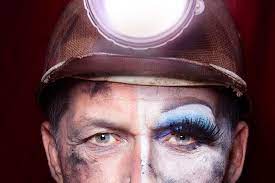 The Glee Club, by Richard Cameron, is the touching story of six hard-working, and hard-drinking men who all share a love of music, but who also love each other; as the play explores the themes of camaraderie, friendship, and troubles. The play, in its revived format by Kate Wasserberg has been wonderfully cast and is garnering much attention having played to packed audiences in the West End following a sell-out run at The Bush Theatre in 2002. It is now back on our stages presented by Stockroom, Theatre By The Lake and Kiln Theatre. This is a glorious production, and one not to be missed, in fact it was absolutely bloomin' beltin’!

The play immediately takes audiences to the heart of a Yorkshire mining village in 1962. The colliery is, as was then, the beating heart of the community providing men with all manner of things, not only a place of work, but a place of belonging. The six men who form the Glee Club are partners in all walks of life, and we meet them during their rehearsal for their next show at the local gala. The Glee Club is a group of talented singing miners who share a passion for performance and boy do we get one!

Now, this was a show which I had never previously heard of, but I am yet to see a poor production at Oldham Coliseum and so I knew that this would be good. When asking my fellow thespian friends about the premise of the show, I was told it was ‘Brassed Off’ meets ‘The Full Monty’ and whilst I can understand where comparisons between these two shows have been drawn, Richard Cameron’s play brings more intensity and raw emotion to the stage. Indeed, there are moments of true hilarity, but this is coupled with moments of pathos and tragedy. It must be noted that the onstage chemistry between the actors was more than just believable, it felt real. So much so that during the second act, in which we see each members’ lives change dramatically, and for some even irreparably, I was genuinely upset that their friendship was being dismantled.

The cast have been expertly chosen, and as such there were no standout performances, each as brilliant as the other, allowing each carefully crafted character to come to the fore. The six-man band is driven by the group’s accompanist and mining engineer Phil Newsome (Eamonn Riley), who is accused and sexual misconduct and then later admits to being gay – and this is 1962 after all, set in a mining community at a time when there was little acceptance or tolerance of sexual deviance, and is buoyed by the five miners; the ‘sensible’ Jack Horsfall (Matt Concannon), who embarks on a meaningless affair, thus threatening his stable marriage. Bantam (Jack Lord), the joker of the pack more affectionately and aptly referred to as ‘Bants’, whose wife has left him for reasons unknown. We see him stagger around the stage, drunk, and volatile, but also incredibly tormented. Then there’s Walt Hemmings (Dan Bottomley), desperate to reunite his family following the death of his wife, helplessly chasing after women in the hope that they may prove to be the one to bring them all back together. Scobie Glossop (Robert Jackson), family man, reliable and loyal to a fault, and finally Colin Wrigglesworth (Linford Johnson), who is the steady constant throughout, narrating the story from start to finish, taking us on his nostalgic journey of aspiring pop singer.

During the course of the play, each presents their own family problems and plights, and I, along with the rest of the audience, was gripped from start to finish. This is a polished performance; the harmonies were beautiful and the rendition of ‘You Only Hurt The One You Love’ really brought home the gritty and poignant themes of which the play sensitively brings to light.

I would go back and see this play again, in a heartbeat.