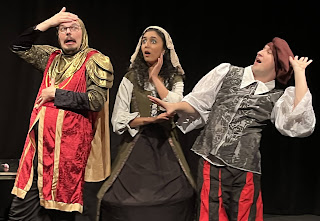 I am a Shakespeare lover and was over the moon to be able to see a comedic take on The Bard. Doing Shakespeare - set in the Northern town with a rather unusual insalubrious name (not one I think I can repeat here) we meet a group of wannabe thespians rehearsing for the town play. For the first time in a very long time, I laughed and laughed. Right from the beginning I chuckled, innuendoes flying, Shakespeare quotes out of context, actors hamming it up. What a great time. As it was the first night and press viewing, we were a sparse audience in one of my favourite venues. Bridewell Theatre in the City of London is a gem of a place, intimate and yet situated in a very busy part of the business district. It has a rather quaint underground bar – so pre-theatre drinks was a must.

This group of six actors making up the Northern Comedy Theatre were hilarious, all of them with a notable repertoire of previous performances. Written by David Spicer, famous for writing a plethora of scripts including writing for Armstrong and Miller, had written several plays to be performed online during lockdown. This same group of imaginary characters were also written into five other ‘Doing…’ plays. Spicer has tweaked the script of Doing Shakespeare to add in nuances related to the pandemic. It was clever, but this is a bit of a dig at Shakespeare snobs (there were a few mentions of those well-known Shakespeare haunts; The Globe and Stratford). This play reminds us that even the small amateur dramatic associations like to speak the language of Will. The first half reminded me of a school play, each actor bringing their own individual character’s prejudices and irritations to the fore. The scene depicts the difficulty that we have all experienced of misinterpreting decisions made on zoom meetings and then watching as the chaos ensues. When all six performers start their dialogues, we have the usual recognisable Shakespeare plays, characters and speeches. It all becomes a battle of egos and jostling to be the star performer, as projected by these seemingly unsophisticated people. However, delve deeper and you will see that although they may be ordinary people they do in fact share a love of the works of the great man himself. We are doing Shakespeare…

The second half was the performance as planned for the audience in the Northern town. “We are doing Shakespeare…” We were that audience; we lived and breathed it. Our six thespians arrived on stage in their cheap costumes because they are ‘Doing Shakespeare’. Still reminiscent of some kind of cheap school production: I laughed out loud throughout the second half. I thoroughly enjoyed it. The whole thing can only be described as a riot in all its forms! What fun the actors must have had preparing and getting this together. I don’t know how they remembered their cues because it was all so disjointed. But it worked and it worked a treat. This show has made my whole week. I am sitting here smiling to myself as I write this review. It runs until Saturday 13th November. Catch it if you can. This show deserves to be played to packed audiences to have an even funnier atmosphere.