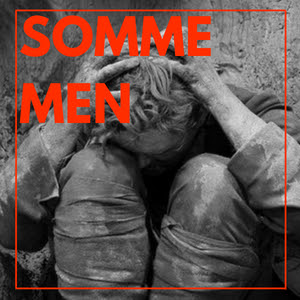 There have been and still continue to be many theatrical productions and artistic endeavours up and down the country this year - and especially at this time - commemorating and remembering the events of 1914 - 1918. Most of the productions I have thus far seen have been original works, written especially for this time, and all having a personal point of reference. Their father's or grandfather's reminiscences, diaries found or tales told by relatives. 'Somme Men' is no different in this regard. This play, written by Parissa Zamanpour has been inspired from the memoirs of her Great-Great-Grandfather Harry Hayes and director Keziah Lockwood's Great-Great-Grandfather Michael White.

In order for these two men to 'meet' and their stories to coincide, a somewhat contrived happenstance needs to occur. It is one which could well have taken place though. It is not beyond the bounds of credibility. The play starts excellently as archive newsreel footage is shown of the troops leaving England in a blaze of glory and euphoria, cutting straight to the horrors of trench warfare and the noise that accompanied it. This footage segued excellently into the start of the play as the four disparate soldiers find shelter behind a temporary lean-to in No-Man's Land only yards from the the German front line.

In the first few interchanges we realise that they got caught in the middle of a mission and had to make a hasty retreat, and are now having to lie low behind this makeshift barricade until it is safe to try to find their guns - left behind in the melee, and then make their way back to the comparative safety of their trenches. They have no weapons, no food, only a couple of stale and mouldy biscuits and a cup full of water to last them until it is safe to leave - this could be days!

In order to allow the giving of background on each character and give some resonance to the story and their individual situations, there is a rather long exposition here which loses pace and becomes a little static. The dynamics between the four excellently chosen cast are superb, but the visual dynamics are less stimulating and it becomes a little wordy. We do learn however that one of the four, a Scot with a stolen knife, is something of a loose canon and manages to incite paranoia and doubt into the minds of others. His drunken singing though I did feel was very much out of kilter with the rest of the play. First of all, where did the alcohol come from if they had no rations? and secondly, if they really were only yards from 'the Jerry' then his shouting and singing was totally unrealistic.

However, the pace and the tension soon came back again with the entrance of an escaped worker from the Chinese Labour Corps. This fuels their mistrust and distrust and eventually, the Scot acts, precipitating a tragedy beyond the grief of warfare.

The play is acted through without interval and is about 95 minutes long. After the initial burst of sound, the play is desperately lacking in sound and lx effects. It is far too quiet and dark. Director Keziah Lockwood (and Assistant Marissa Moore) have managed though to find five actors who brought about some exceptional acting and their chemistry together was at times, electric. Their understanding of the roles they were playing and the situation they found themselves in was profound.