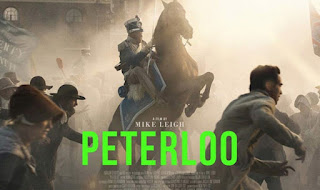 A somewhat forgotten and neglected part of English history is brought vividly to life in Mike Leigh's biopic and lengthy film named after the title of the massacre itself, Peterloo.

In its most simple terms The Peterloo Massacre was a totally avoidable bloodbath caused by the greedy and unthinking governing classes against a peaceful protest by the working classes. It happened in St. Peter's Fields in Manchester on the 16 August 1819, and having lived in Manchester most of my adult life it is something of which I was aware but I suspect like most, did not know the details.

In this regard, making a film that is so historically accurate the lines between documentary and film become perhaps a little blurred , and so Leigh centres his docu-drama on a fictional family from Chadderton, and another from Middleton. The film is very long (too long in my opinion) and is extremely wordy for a film. It felt more like a stage play.  In fact, I couldn't help but notice parallels in this film with Arthur Miller's The Crucible. Both are based on historical documented events; both are highly politically charged; both show trial scenes; both have a very long exposition and build-up to the 'main event'; and when the main event eventually does come [the trail and screeching women in The Crucible, and the actual massacre in the film] they are not as fantastic or as thrillingly emotional as the build up wanted you to believe. And finally, both end tragically.

It is England and King George III is on the throne. the rich are very rich, the ruling classes making laws to suit themselves, whilst the poor get poorer and are starving. The film starts as the Battle of Waterloo comes to an end and one bugler, still alive at the end makes his way back to his home in Chadderton. The Corn Laws were in force, restricting the importing of foreign grain pushing the price of domestic produce higher and higher making it impossible for the poor to afford; and then as the threat of demonstrations and insurrections becomes a reality the government repeal the law of Habeas Corpus [a law which stops a person from being arrested and detained without evidence and sentencing being passed without proof of unlawfulness being committed]. Things were not looking good, and as the common people attended rallies and spoke eloquently about their lot and how to change it - no change was actually being effected.

The gathering at St. Peter's Fields in Manchester was the largest public gathering of its kind and was attended by people from far and wide around what is now Greater Manchester {Lancashire then}. It was a peaceful demonstration - a show of strength and solidarity in numbers alone - no weapons were brought and no fighting was on the cards. This didn't stop the government sending in the yeomanry - mounted swordsmen and infantrymen - and as they blocked all exits from the meeting place - there was a massacre of thousands of innocence unarmed civilians. Men, women and children. It was a bloody and black day in our history books.

The directing of the film is quite indulgent. There are many reaction shots and many head shots. It is quite intimate in this regard. The wider tracking shots come as a bit of a surprise at times. The acting from all was tremendous and very real and naturalistic, despite the theatricality of the dialogue. The words too were sometimes a little strange as was the placing of regional accents. Perhaps things were different in the early part of the 19th century but no-one spoke with a Manchester accent and most spoke with what would now be classed as Yorkshire, except Neil Bell's lovely Middletonian as Samuel Bamford. That was a joy. It was heartwarming though to notice so many well known local actors and actresses being cast in this film - a Manchester film starring local talent, such as Julie Hesmondhalgh, Fine-Time Fontayne and Maxine Peake.

All in all it is a very worthy film in its faithful telling of a story which ought to be better known; but the pace is very slow and the film offers no surprises. Overlong and self-indulgence on the part of the directer (Mike Leigh) make this a film you will watch the once just to say you've seen it, and then move on.