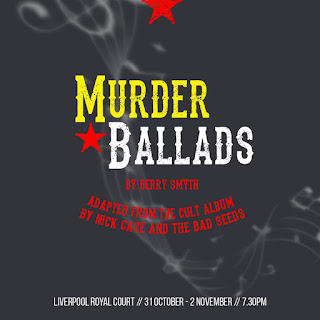 Take ten songs from an Australian music ballad album, link each in a story, set it in Texas (specifically West Texas), cast the best musician/actor/singers and production team you can find, then perform it in Liverpool. That’s what writer Gerry Smyth has done and maaan (imagine a Texan drawl throughout) did he do it right. What a treat.

The fifty minute each half show is a veritable romp through Nick Cave’s macabre Murder Ballads album with Texan accents. Famous in the UK for Red Right Hand – Peaky Blinders theme song, Cave’s album falls into the Murder Ballads genre subcategory ‘murdered sweetheart’. It’s a complicated plot that gets off to a slightly ropy start that does not really set up the rest of the show with a far from joyful ‘Song of Joy’ leaving the audience and to an extent the cast looking slightly bewildered, with narrator Virgil (Tom Wilson) addressing the audience, ‘Ya’ll confused’.

Set in O’Malley’s bar the cast of four re-enacted a series of violent murders attributed to a tall dark stranger resembling mine owner, with a ‘killer smile’, Stagger Lee who ‘got himself some fancy duds’, played gloriously to the hilt by Thomas Galshan in a full-length coat dressed all in black from his Stetson to his cowboy boots. Accompanying songs were played by old man Gaby (Gerry Smyth), in worn dungarees, on electric guitar and percussion (even using his bare toes) and Tom Wilson on acoustic guitar with the multi-talented Laura Connolly on beatbox. The cast sang with character and great delivery interspersed with narration and some comic O’Malley’s bar banter as they entertained their audience and a charming Virgil tries to keep us on track while taking his chances with the feisty and fearless foul-mouthed barmaid.

The small round bar tables that fill the front of house are ideal for this immersive performance. Stepping into the audience frequently, Connolly almost stole the show as she transformed seamlessly between playing barmaid, mothers, daughters, wives and shocking murderer. The gruesome tales followed the stories of two families, the Lees with three daughters and the Days with an eligible son who they believed was too good for the Lees’ daughters. All were violently murdered and a gun-slinging Stagger Lee, (Galshan looking like a young Tom Hardy), went in search of revenge.  At one point an unexpected (how they manage to continually shock is quite an accomplishment) murder caused Virgil to declare ‘I feel blue’, which roused the band to a foot stomping, hand clapping sing-along with the show ending on a well-deserved spontaneous standing ovation from the clearly happy audience.

Director Ellie Hurt is fast building a reputation for her directing skills and with the aid of fight director Daniel Meigh pulls off some amazing choreography and stage movement. There are fight scenes a plenty and a delightful ribbon dance becomes a murder scene. The cast are never less than fully engaged with their audience with a sly wink or cheeky lick of the lip and their energy is amazingly high from start to finish. The Texan accents and setting work really well as Smyth cleverly injects a southern charm into the gruesome characters that continues to take you by surprise with each murder. Some slight sound issues owing to the speed of delivery required full concentration from the audience, so it maybe needs tweaking up for those further back from the stage to follow the fast-moving hilarious story. These minor issues are all fixable and Murder Ballads deserves far more than this packed out three-night short run. Thoroughly enjoyable and entertaining.