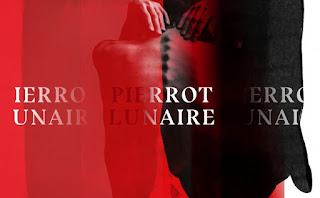 Arnold Schoenberg’s melodrama (in the truest sense of being a ‘play with music’) Pierrot Lunaire is, at 106 years old, just as disturbing and radical as it was when Schoenberg wrote it. A cycle of twenty-one songs, in three groups of seven, Pierre Lunaire marries a selection of poems from the collection of the same name written by the Belgian poet Albert Giraud to short, abrasive, atonal pieces of music written by Schoenberg. Pierrot Lunaire occupies liminal spaces in terms of its form (theatrically, the work doesn’t fit the mould of a traditional concert performance but neither does it fit in with a grander theatrical staging of an opera and the vocal performance style is ‘Sprechstimme’ -a halfway place between singing and speech) and content (the setting of the piece is a nightmarish night-time hinterland between sleep and wakefulness or sanity and insanity). The presentation of Pierrot Lunaire by the Manchester Collective at the Royal Northern College of Music made for a striking night of uneasy listening (in the best possible sense of the term).

The presentation was a night of two halves: the first half was an exploration of the background and themes of Pierrot Lunaire, akin to a behind the scenes documentary on a DVD release, presented by BBC Radio 6 broadcaster Elizabeth Alker who guided the audience back to Vienna in 1912 and the state of the world in which Schoenberg lived in at the time of composing (which sounded similar to the state of the UK in 2018; plus ca change) and, through discussion with director Emma Doherty and conductor Tim Burke, examined the piece’s themes of darkness, violence, and mental fragility, and the musical atonality for which Schoenberg became known and which provided a musical counterpoint to the thematic concerns. Doherty talked the audience through the artistic decisions she had made regarding the performance of the piece – it is written for a solo singer (with Lotte Betts-Dean taking on the Sprechstimme duties for the Manchester Collective) but the poems presented numerous characters, including an ‘anaemic washerwoman’, Columbina, and the eponymous Pierrot (a character-type from commedia dell’arte, famed for being the ‘sad clown’) and that Doherty had chosen to present the various characters as the different personalities of the song cycle’s narrator – here called ‘Character A’ – who suffers from Dissociative Identity Disorder. Burke touched upon Schoenberg’s composition of the music and how it reflected the growing exploration of the unconscious which was emerging at the beginning of the 20th century with the growing influence of Freud’s establishment of modern psychoanalysis and tied into the text’s concerns with desire and mental fragility. In between the discussions, the ensemble of piano, violin/viola, cello, flute, and clarinets performed brief excerpts of music from the song cycle to present how Schoenberg used radical (for the time) atonality to echo the chaos of the text but still structured his music around counterpoints and motifs to give audiences something familiar to latch on to. The discussion was informative and was ably guided by Alker and was useful for preparing the audience for what was to come; were the audience to have been thrown in at the deep end of the full performance it may have proved to have been too overwhelming.

After a brief interval, it was time for the full performance of Pierrot Lunaire. The set was minimal, with a double bed occupying centre stage, above it was a light with a white spherical lightshade around it, clearly intended to represent the moon, the celestial object which holds sway over the despondent Pierrot, nursing unrequited love for Columbia. Around the bed, the ensemble was arranged, a piano positioned stage right, the violin positioned next to it, stage left was where the cello, flutes, and clarinets were. Betts-Dean took her place in the bed before the ensemble and Burke emerged onto the stage, leafing through a book, looking like someone struggling to settle down and go to sleep. As the frantic opening piano lines of the first song, ‘Moondrunk’ began, Betts-Dean intoned of “The wine you drink in through your eyes…” and it was soon apparent that the poetic imagery, made understandable through an English translation by David Poutney, was a heady mix of Symbolism and proto-Surrealism. Throughout the performance, Betts-Dean’s Sprechstimme performance clearly defined the piece’s protagonist as someone who was on the edge – on the edge of that subconscious realm between sleep and wakefulness, on the edge of sanity itself – and her performance was made all the more remarkable by her direct stares out to the audience, hardly blinking; the way she clambered over and around the bed and frame, full of restless energy; and how she was able to change her tone and intonation depending on which character was speaking: her anaemic washerwoman genuinely sounded weary. The lighting was superb as well, with the light above the bed changing colour as the piece progressed: as Pierrot sung-spoke of ‘red rubies’ the lighting shifted from white to ruby red and would change to blue as depression and despair took hold of the protagonist towards the end of the second, bleaker part of the song cycle’s triptych. Musically, the ensemble were tight and played with passion: special mention should go to violinist and viola player Rakhi Singh doing incredible work with the tension-filled string screeches as madness enveloped Pierrot and pianist Chad Vindin carried much of the piece (it is highly dependent on the piano) with flourishes of frantic, discordant musical lines shooting through each of the twenty-one songs, each one providing a short, sharp shock. The text’s violent imagery, speaking of “lacerated arms” and “swarms of black insects” blotting out the sun, mirrored the turbulent waves of atonality in the music; listeners familiar with the later works of singer Scott Walker, in particular his bleak, brutal 2006 album The Drift, would find common musical and vocal bedfellows within Schoenberg’s work, a fact which attests to the composition’s modernity.

The Manchester Collective should be proud of what was an informative and provocative performance. While Pierrot Lunaire is a highly distressing, disturbing marriage of intense music and haunting poetry, there is something strangely comforting about it. While one cannot help but wonder if the piece would have worked better had it been presented in its original German (given the more aggressive tones of the Germanic language, the poems would have sounded even more unsettling), this presentation of Schoenberg’s work is full-bloodied and, in these turbulent times of Brexit and Trump, is perhaps the ultimate soundtrack to the world of 2018.