REPORTAGE: Riffs And Meaning: The Manic Street Preachers and Know Your Enemy - The Principal, Manchester. 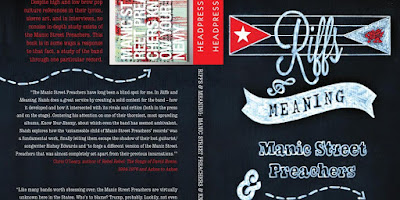 The Louder Than Words Literature Festival celebrates the best new literature about music. For 2018, one of the events saw music journalist Stephen Lee Naish in conversation with legendary singer, musician, and fellow music journalist John Robb about his newly published book, Riffs & Meaning: Manic Street Preachers & Know Your Enemy. The work revisits the Welsh band’s sixth album, a sprawling, chaotic, vitriolic work released back in early 2001, in a world which was yet to be shaken by the September 11th terrorist attacks on the Twin Towers, and seeks to reassess the album in the context of their career and how it has been received by the band’s fan base since its release.

The talk commenced with Naish playing a clip of the Manic Street Preachers playing their song “Tsunami” from their fifth and biggest album, This Is My Truth Tell Me Yours at the 1999 V Festival. This performance, which captured the band riding high upon the commercial success of that album (released the previous year), inspired Naish to write an essay (‘Tsunami on VHS Cassette’) which he read for the audience after the clip had played. The essay, not included in the book, latched on with insight to the contradictory position the band had found themselves in: playing to huge festival audiences and stadium crowds after finally releasing a Number One album and yet trying to retain the spirit of their punky, “mess of eyeliner and spray paint” beginnings. It was this contradiction which their sixth album would embrace: at the point of their career where they were at their most commercially successful the band released an album which was long and saw the band move away from huge stadium anthems to writing political, polemical, sloganeering songs which alternated between jagged punk riffs (‘Intravenous Agnostic’), Beach Boys-style harmonics (‘So Why So Sad’), and even a venture into disco (‘Miss Europa Disco Dancer’).

Robb noted that the Manics were “always in reaction to themselves,” and Naish agreed that Know Your Enemy was “a mess of a record” which was deliberately designed to react against the epic anthems and treated guitar sounds of This Is My Truth Tell Me Yours. Naish went further and stated that the album was the first one where the band felt like a trio: the disappearance of lyricist and guitarist Richey Edwards in 1995 cast an obvious shadow over Everything Must Go, the band’s first release after he went missing, as Edwards was both present on the album lyrically and, on the closing track, musically, and This Is My Truth Tell Me Yours had one song which was directly about him (‘Nobody Loved You’). Know Your Enemy, however, had no direct references or lyrics from Edwards, instead bass player Nicky Wire was setting the album’s agenda and Naish believed that the album was designed to simply annoy everybody. By failing to match the commercial success of its predecessor (the album peaked at Number Two in the charts), the album seemed to have turned away the more casual fans the band had picked up over recent years, and even the band themselves seem to hold the album in low regard; vocalist and guitarist James Dean Bradfield rated the album as their second worst release (their seventh album, the elegiac, shimmering, introspective album Lifeblood had the dubious honour of last place – but Bradfield blamed that album’s existence on Know Your Enemy).

Yet, Naish spoke passionately of the album, while not his favourite album of the band’s back catalogue he still recognised that it was “a great album to put on when you’re angry with the world”; given the current chaotic state of political affairs in the UK and abroad, it would be unsurprising if the album received a new lease of life. Naish admitted that the album, with its references to the Civil Rights struggle of actor and singer Paul Robeson, and the Elian Gonzalez case in 2000, “definitely pushed me to the Left” politically.

Naish did highlight how the Riffs & Meaning book was a personal take on the album, albeit one which benefited from the insight of fellow fans. As the talk was heading towards its conclusion (barring a brief Q&A), Naish made the rather pertinent point that the songs of the Manic Street Preachers can point listeners towards political and philosophical ideas but that it is a foolhardy endeavour to try and place those ideas on the shoulder of the band; when asked in the Q&A section about the band’s (in)famous concert in Cuba prior to the release of the album, Naish said he stood behind the idea of the concert and that it was right for the band to play there (becoming one of a select number of ‘Western’ bands to play in the Communist state) but did think that some events had been deliberately staged managed by the Cuban government (such as the audience being made up of invited Communist Party members and not regular Cuban citizens and the band’s meeting with Fidel Castro, something which seems to have been a sudden ‘surprise’ going off the band’s body language throughout the meeting).

Both Robb and Naish were very knowledgeable about the band, their albums, and music generally and it was hugely enjoyable to see Naish speak with such enthusiasm and passion. The book is written in an equally engaging and passionate style and it will be well worth a read for fans of the Manic Street Preachers and may even encourage a critical reassessment of Know Your Enemy, an occasionally messy album which, according to Naish, “tried to recapture some of their history” by marrying blistering guitar riffs with lyrics full of meaning, references, and allusions to politics, philosophy, and culture. As fellow Welsh musician Catherine Anne Davies (aka The Anchoress) wrote in a piece for Q magazine, being a fan of the Manics meant “you were more likely to end up with a PhD than an STD.” The level of discourse at this event from Naish, Robb, and the audience, easily proved Davies’ point.