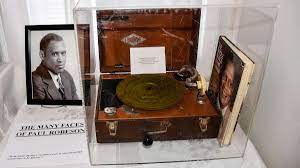 'Paul Robeson’s Love Song: An Audiovisual Experience' was one of many shows being performed for The Little Liverpool Theatre Festival at St. Luke's Bombed-Out Church in the heart of Liverpool.
Produced and written by Tayo Aluko, this was a labour of love in putting the whole project together. It must have been very difficult to do a play recorded all over the world, especially with all the different time zones involved and the current pandemic, but Aluko managed to pull it off with amazing results. The writing was authentic and the dialogue delivered incredibly well by the cast. It was extremely emotional and heartfelt at times too. Olusola Oyeleye directed this hard-hitting and emotional piece of theatre. Her passion and vision for the play was clearly noted and demonstrated throughout.
The cast consisted of an array of actors all in their hometowns, including Tayo Aluko as Paul Robeson (Liverpool, UK), Nils Swanson as Charlie Daniels (Peekskill, New York State USA), Ananada Bena-Weber as Adele Spears (Los Angeles,USA),  Lisa Merrill, as Jessica Winger (New York,USA), Mark Atkinson as Paul Robeson Junior, (Long Island, New York, USA), Bob Weick as George Simone, (West Chester, Pennsylvania, USA), Denis Nelson as Larry Brown (Bergenfield, New Jersey, USA), Michael Bias as Benjamin Winger and David Ravics as Sidney Danis, (Portland, Oregon, USA), Michelle Pauls as Helen Rosen (Philadelphia,USA), Lesley McCurdy (Windsor, UK), and finally, Daryl Van Leer, as Lloyd Brown  (Nashville, Tennessee, USA).
The play was recorded online during lockdown and set in various parts of the world, particularly the United States Of America. The play opened featuring the two siblings clearing out their late mother’s belongings in August 2020, where they suddenly discover a package containing a record, which suggested there was a possible romantic connection between their mother and Paul Robeson, an African- American actor, singer and activist, dating back to 1949.
As the siblings watch coverage of the protests of the latest police shooting of a civilian, which was happening literally down the road from where they were located, they recalled their mother telling them of the racist and anti-Communist protests at a Paul Robeson concert outside Peekskill, New York in 1949. They realised as a child, she had witnessed the best and the worst of their country in violent conflict in the same way as was the unfolding now in Kenosha, Wisconsin.
The were many running themes in the play, including racism, discrimination, family relationships, tragedy, empowerment, prejudices and injustice, whilst the narractive managed to convey a lot of friction, conflict, tension, drama and emotion throughout the show. The dialogue on the audio was delivered with perfection and precision. The story flowed incredibly well and gave all the actors an opportunity to shine. The story was fictional but centred around the real Peekskill and Kenosha happenings.
The technical team consisting of Osian Griffiths and Dom Beale did a brilliant job regarding all the technical aspects of the show. The large projector with the pictures being displayed as the dialogue was spoken was clearly visible from all angles of the stage. The sound of all the audio dialogue between the characters could be heard clearly and precisely.
On a final note, the words spoken by the characters came from the heart, highlighting all the issues they were facing. Racial unrest and discrimination against ethic minorities is as relevant today as it was all those decades ago. Unfortunately, a lot still needs to be done to raise awareness and to change people’s prejudices and educate people.
I would love to see this play taken further, and indeed the team did mention they are trying to get this show on the radio, which would be a fantastic platform for this play to be heard. Having the Q and A at the end of the play was a wonderful idea, featuring Aluko himself and fellow actress and friend, Lisa Merrell. This gave the audience a fantastic opportunity to ask questions and give talk about the show. Well worth going to see this emotional and powerful piece of theatre.
Reviewer - Mark Cooper
on - 15.7.21
at July 18, 2021