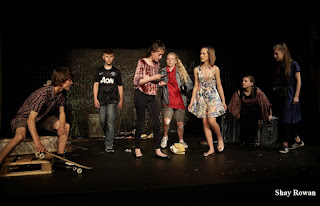 According to Libby Hall, the writer and co-director of this play, the melting of a single snowflake is enough to cause an avalanche. In this instance though it is an avalanche of disaster and tragedy which escalates to Shakespearean proportions through youthful pride, jealousy, revenge and misunderstanding.

Salford Arts Theatre's Young Performers' Company is a group of enthusiatic 7 - 18 year olds who take regular instruction at the theatre to discover and further their theatrical talents, and for this play just 11 of them, from the 12 - 16 age group, were chosen to perform in Libby Hall's second Greater Manchester Fringe Theatre offering.

Hall's first play, 'Things We Tell The Hours After Midnight' won The Best Newcomer award for Hall and Best Ensemble for the Young Company at last year's Fringe. I was very disappointed that I was unable to see it, but was truly looking forward to what Hall had in store for us with this her 2019 offering, 'The Melting Of A Single Snowflake'.

It is a play about, by and for the youths of the city. In other words it cannot be said to be inauthentic, but either things have gone seriously down hill since I was young or I had a charmed upbringing I'm not too sure. The play deals with youths who openly buy and sell drugs, live in constant fear of the unnamed 'gang' that seem to control the area Mafia-like, and use a junk-strewn backyard near the canal as their playground. And all that is 'filler', and has little or nothing to do with the actual story. Also, unsurprisingly, the play also shows a breakdown of stereotyping and sexual prejudices as there is a somewhat epicene girl who loves boxing and a bisexual boy admitting his love for a girl. To which, she replies dryly, "You can like me, you can fancy me, but you can't love me - we're too young to get hurt."

Hall's writing is current and vital, and uses humour to emphasise the tragedy. The youths walk, talk and act naturally, because that's what they are and who they are - and Hall's craft is to hone that into characters and situations, which, under the tutelage of director Roni Ellis, she does with ease. Half-way through one of the darker passages of the play we find ourselves laughing loudly at a moment when one of the girls describes what having a period is like. Not only the actors but us, as audience, need that release too.

The main action of the play surrounds a missing boy and friend from their school, Sam.  No-one seems to know exactly what happened to Sam. Did he run away? Did he fall prey to the ubiquitous 'gang'? Did he drown in the canal? Only one boy knows the truth, but he isn't telling - not yet at least! But as one tragedy happens, this precipitates another and the guilt he is feeling makes him blurt out the truth, only to find that this backfires and causes an even bigger tragedy than anyone could possibly imagine. The play is almost in 2 seperate halves. The first half, the exposition, is rather fragmented and unclear. Small vignettes, seemingly unrelated, happen in quick succession, and although there is much information to impart, one also has the feeling that there are some inconsequential things too which do nothing but dilute the strength of the narrative. The second half of the play has the cast all returning on stage in school uniform, a timely reminder that they are indeed, just that - school children; despite their adult talk and bravado of the first act. The second half is much tighter and more dramatic delivering punch after punch, and you know that things are not going to end well. The end, albeit perhaps a little far-fetched, isn't out of kilter with the line of the play, and indeed does deliver the message home. If you don't leave with several lumps in your throat then you obviously belong to the unseen 'gang'!

Slightly spoiling the overall effect of the play this evening was the SFX. The opening and closing music, too loud for the size of the venue, cutting off very abruptly. Perhaps the end of the play needed to be silent and dispense with the loud music altogether. A time for reflection maybe. Periodic newcast voice-overs which again, although relevant, were perhaps unnecessary and a way of incorporating these messages into the body of the play itself might have been preferable. The sound effects for mobile phones etc were all again far too loud, and during the second half this evening strange sounds and talking could be heard, extremely muffled, coming from the speakers when it obviously shouldn't have been. But these are slight technical issues which can be easily rectified.

The acting from all the 11 cast was excellent, and their individual characters and characteristics shone through. Having been, (but thankfully no longer!), a high school teacher for some time, I can attest to the fact that these characters really do exist in the real world, and they were not in the least over-playing their hands for the sake of the production. All should be indeed highly commended. I especially enjoyed the portrayals of Tom (Vincent Purcell) - moody and introvert, before revealing his true self, an extremely well measured performance; and Devon (Joel Hill), a young boy with a nervous disposition unable to stay still or be quiet even for one second. He provided much of the comedy relief in the play, and again, a well considered approach to a rather difficult character.

Sensibly and effectively directed by Ellis and Hall, but I am really rather glad I sat towards the front of the theatre; the youngsters' voices, although clear and well enunciated, were, at times, not being projected enough to have reached the back.

Congratulatios to Libby Hall. If this is an example of her writing ability and sensitivity at only 17 years of age, then I think she has a very promising career ahead of her; and whilst she remains at Salford Arts Theatre, she has very capable and passionate mentors and a lovely group of student actors upon which to call.