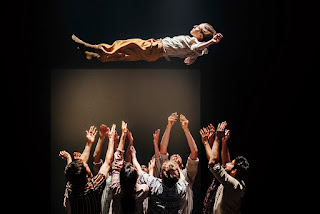 Hofesh Shechter is back in Manchester again, this time with a show that has a title which does little or nothing to bely the show's content. In fact, you could be forgiven for thinking that the title refers to the company's swan-song performance, or that it is a theatre or performance related theme running through in which they all take a huge bow at the end. [the piece ends not with a bang but with a whimper!]

Quite simply put, this is an astonishingly dark, sardonic and apocalyptic piece of dance which sees a quintet of five musicans playing live throughout [augmented by pre-recorded soundscapes and beats], dressed in tails and entertaining - even laughing and joking with the audience in the central section - showing themselves to be excellent musicians as they play a number of instruments between them from the folk music repertoires of various countries. However one can't help feeling that this is the band on board The Titanic and as they smile and assure us everything is all right and they play jointy folk-like melodies, all around them the 'ship' is most definitely sinking.

It is not just the musicians though which add to this nightmare vision. On stage are five large black plinths, rectagular in shape and are used creatively throughout to block, encapsulate and frighten. If you've ever seen the film 2001, A Space Odyssey then you'll understand exactly what I mean when I say that we (the audience) were the apes looking at these strange shapes on the stage and not understanding.

Creative and superbly designed lighting (Tom Visser) is also an essential element of Shechter's work, and again this was stark, moody, precise and visually stimulating. The music, created by Shechter himself was once again a mix of folk beats, rhythm and 'melodic noises' - this time however, we were pre-warned that it was going to be loud - very loud - and that earplugs would be available in the auditorium for us if we needed them. There were at least two sections in this piece where the rhythm was utterly relentless building louder and louder, and even with my earplugs firmly in place it was at these times still too loud for me. I have no idea how the audience coped if they chose not to avail themselves of these - moreover I simply cannot understand why the music needed to be so deafening. There is never a credible and justifiable explanation for piercing and damaging an audiences' ears no matter what - this is theatre, and we can "imagine" and "feel" for ourselves - that's what theatre is all about!

However, let me turn to the dancing. Once again Shechter's trademark style was written all over this piece; from his playing with the light / heavy dimension and his quick change of speeds and directions in the choreography, as well as using many different countries' country / folk dance steps in interesting ways throughout. Here Shechter shows us a nightmare.... the end of the world perhaps? - his "grand finale" of the human race. We watch as people's throats are slit, dead bodies dragged across the stage and we even are delighted by a section which shows four men dancing with the corpses of four women making elaborate and clever patterns. Does this tell us more about oursleves and human nature in general than we would like to think? Or did we just dismiss this because we knew the dancers weren't really dead?

As always with Shechter's work, the ultimate interpretation of his choreography - nay his overall productions - lies with the spectator. For me this was a very dark and quite political piece which warned of the dangers of blindly following a leader. [quite apt given the date on which I saw this show had the European Elections taking place and coming home to the news that Theresa May has announced that she will be stepping down]. However, whatever your interpretation of 'Grand Finale' it is an intricate, bold, and visceral piece of dance-theatre and you would be absolutely mad to miss it!! (just bring some earplugs!)