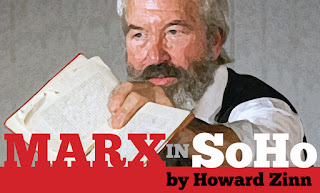 I have been seeing quite a few one-man / woman performances recently; some with distinctly more success than others. However, at least with this play I knew I'd be on terra firma with it being a published and performed play by American historian, political-thinker and playwright, Howard Zinn.

The Marx in question in the play's title is - no, not Groucho, but - Karl. Karl Marx has come back down from Heavan on a day pass to try and clear his name. The term, Marxist, he says, has been misappropriated, and those who follow the path of socialism or communism do so with capitalist greed and ethics. His arguments and elicudations are excellently presented and water-tight. I am not particularly politically motivated personally. It's possibly the wrong attitude, but one that I have adopted as a way of survival. I have never liked polititians, and never liked governments. But there's very little I can do to change it so, 'shut up and put up' has been my modus operandus. This play has made me see things differently, and although I am most certainly not a socialist, neither am I particularly a capitalist either, and like majority of the population, see no good coming from our newest leader.

The play lasted about 75 minutes non-stop, and was performed with authenticity and zeal by the very talented Robert Weick (directed by John Boyle). Weick portrayed Marx as a human being, flawed, humane, caring, loving, needy, but also with a lot of vehemence, conviction and opinion. The performance was excellently measured, dynamically perfect. I was gripped and interested throughout and mesmerised by the truth of Weick's performance.

Where the play - and indeed the venue - falls down is the fact that this play is set in New York. Weick had a very discernible American accent, and used Anerican words (not British English) for certain things, and referenced the US government, social care, health care, newspapers, polititians etc... And with the performance being in the same building as Chetham's Library, a place where Marx vsiited on more than one occasion and sat having discussions with Engels; it just felt very strange, and somehow quite wrong, that no reference to this was ever made. It would have been superb as a site-specific performance, with Weick seated at the window bay and the audience watching him there. Admittedly, the script would need to be changed to Manchester with English references and not New York, but it would have made far more sense!

The play is full of amusing, poignant and relevant anecdotes, as well as giving us a little history lesson into the life of Marx and his friends (and enemies). He quotes from his books and tells us how they SHOULD have been interpreted, and not the way the greedy rulers of the communist world did and have interpreted them. Weick's deep, resonant and sonorous voice along with excellent articulation made listening to him a joy, and his characterisation empathetic and balanced. But I didn't understand why Karl Marx (A German Jew who lived in France and England) would speak with an American accent!

And with such rousing and inspiring scripting as "Capitalism turns humans into commodities to be bought and sold and then discarded", and "Radical is to grasp the root of the problem; and the root is us.", it is impossible not to be moved by Karl Marx's thinking.

A very simple, but striking and intelligently focused play, performed with love and attention to detail. No matter what your politics, this is a superb play, superbly performed.