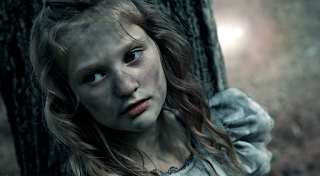 Avarice is a 15 minute short indie fantasy adventure from America. It is entirely without dialogue but has an original score from Kenton Smith which amply creates the right moods and fills the 15 minutes with complimentary aural drama and stimulation.

It is professionally and clevery produced and edited and comess from Timid Monster and Taylor Made Films. The piece itself being written and directed by Rachel M Taylor.

The entire film is an allegory of the dangers of avarice. The film even starts by showing us a quote from Socrates "He who is not contented with what he has, would not be contented with what he would like to have." It is the premise of this quote that takes the young protagonist, Haley Parker (pictured) on her joureny of self-discovery.

Awaking from sleep in her airy bedroom in a large detached suburban house, she finds an alien light - rather Tinkerbell-like, in front of her. This tiny yet seemingly mischievous Light makes her toys come to life in font of her and she is delighted. However, once she tries to grab the Light it dashes out of the open window as if daring her to follow. Of course she does, and the Light leads her away from the brightness and security of her known garden perimeter, into a wood which gets darker and more creepy the further they progress. It is here she sees her alter-sgo. It is her, but as a girl of ash - a girl who has succumbed to avarice, and is carrying a beautiful bejewelled vessel. Her alter ego then beckons her to follow and leads her to a door, which she must enter. Once inside, she sees many other similar 'Ash-folk'. Motionless, grey, zombie-like and all holding their precious shining jewels.

For the girl, it is now a case of realisation, that these people are the ones whom Socrates warns us against, and she runs, only to find another trap, another enticement along the thick path home. A tunnel, and a 'fake world' - almost an art installation of jewels and her life so far. A picture of her and her alter ego standing by the door is a rather prominent feature of this particular set design. However, once she finds that possessing these fabulous trinkets isn't good, it is the small alien Light she turns to for help as she and her envirmonment are becoming engulfed in thick swirling black ash. It is only her determination and resolve which allow the Light to take her back - with a jolt - to her garden, where she sits, dirty, and her ego bruised.

A rather curious, but oddly compelling film. Made even more so by the 'anti- Alice In Wonderland' quality the film manages to imbue. It is what would have happened to Alice if she had given in to the Dark Side perhaps.. however the message is clear, and we should all be content with what we have. The film cleverly and perhaps wisely avoids the cliches of her returning home to hug her pet dog or have her mother, worried sick with tears in her eyes, run to greet her. Instead, it is a rather stark and solitary message. She alone was responisble for her waywardness, her greed, her curiosuty, and so she alone should find comfort in being returned to her familiar surroundings.