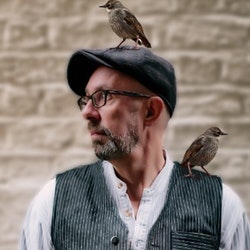 As soon as I saw this being advertised as part of Greater Manchester's Fringe Theatre Festival, I knew I just HAD to go. I had never heard of Steve Vertigo before, but I am a huge fan of clever wordplay and language-based humour, and the title was, to say the least, intriguing.

After arriving early, and wet, and being told by one of the staff that she thought the gig had been cancelled, I was ushered down some dark and dank steps to a strangely shaped basement performance area. It had a feel of illicitness about it. It appealed.

At six foot something, Steve Vertigo cuts quite a figure, but rather than using his height to make his persona even more imposing and forthright, he is actually very gently spoken and humble. His humour is, admittedly, a little away from the norm, but once you get on board and travel with him on his rambling journey of absurdity, it is very cleverly constructed, intelligent, and yes, also funny too. Watching him perform a nose dive towards the earth from the edge of the thermosphere with a host of starlings shouting 'Scream if you want to go faster!' has to be seen to be believed!

As you might have guessed, Vertigo isn't your every-day comedian to tell jokes, one-liners or anecdotes. He's a storyteller. In his 55 minutes on stage he told only one story, quite seriously, perhaps quite laconically, but never once did you ever doubt that this wasn't him recounting something 'real'; it was said with such conviction and actualism. {if he can be a starling and can fly, then that is so!} The humour comes from the ludicrousness of the story itself. But it is a very clever ludicrousness, immaculately constructed with nice little call-backs throughout .

It starts with a murmuration; and of course it does help enormously if you know what this word means.. if you don't then you soon will, since he joins a murmuration of starlings off the coast of Brighton, and the story goes from there. It's also quite an educational and informative story too, as we learn more about how the starlings form their mururation and this, somehow, gets us into quantum theories and alternate universes. We then go through several more ideas and subjects, going to Stephen Hawking's funeral before travelling to a Pamper-Parlour For Goats in Guatemala (don't ask....!), and into the realms of AI. It is here that AI takes over and starts controlling us and destroying nature (humorous but with a very real and stern warning hidden within!), to him taking himself on a date to an Italian restaurant to finally ending back with the starlings again - although maybe not in this universe...!

His somewhat deadpan and serious tones, along with his chatty and relaxed manner really do make Vertigo quite a unique comedy act. I don't think his rambling narratives would be for everyone, but if you would like 'Jackanory' on drugs, then maybe his style is right up your street! I really enjoyed it, and look forward to his next visit to the city.