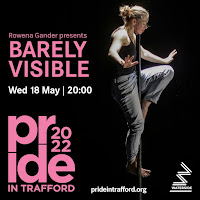 A collection of common attitudes to lesbians is here turned into a dynamic piece of physical theatre and spoken text, performed with Amazonian grace and skill in this one-woman show. Claire Bigley, producer,  presented “Barely Visible” at Waterside, Sale, as part of the Pride In Trafford season.

The bare stage held just one big black metal disc, with hands and feet slowly starting to peer out from around it. A very shy performer, Rowena Gander, slowly revealed herself and turned the disc around to show an immense metal pole on the other side. She explained that as women are generally less visible than men, queer women are even more invisible. Then she was strapped to the disc, psychiatric institution style, and a series of 20th century vox-pops recordings of people giving their uncensored views on lesbians boomed over the sound system.

Gander is an incredible physical theatre performer, as smooth as a circus artiste as she balanced and hung from the pole, but also bringing a variety of societal and emotional states to life as she glided around the stage. She particularly got stuck into the expectation to be feminine – this one is not unique to lesbians! – and to be delicate and not take up too much space, with a physical send-up of the lipstick-and-high-heels image.

She had a lot of fun with the 'top ten lesbian murders in films' section. Male commissioners wanting her to create work that is sexy rather than lesbian-themed came in for a swipe. As did medical staff who ask about her contraception methods. Gander has a lively sense of humour, and at times came downstage to charm the audience directly – and also to show off the weight of her 100 foot pole, which she could manipulate effortlessly.

Katy Perry’s song “I Kissed A Girl” came in for quite a heartwrenching sequence of nightclub encounters involving straight women trying to use her just for the experience, with voiceovers from actors Leah Gould and Emily Price. More voiceovers from actors Joseph Owens, Ben Philips and Leon Armstrong bombarded the speakers with pick-up lines, disbelief at her sexuality, and complaints of “what a waste of a woman.”

Eventually Gander changed from jeans to a Grecian-style red gown, and metamorphosed into a goddess who was above it all.