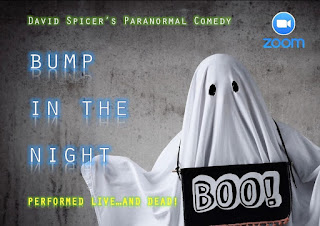 They’re back! The same cast and creatives which kept us smiling and entertained through lockdown have returned with a new play by David Spicer. A mildly jovial and comical take on a terrifying ghost hunt. But, was everything as it seemed? Sharon, Martin, Carter, and Lorraine made for an incompetent “Scooby-Doo” gang – nevertheless we’ve grown a soft spot for them. Trick or treating was not recommended in what has been an extraordinary year, so there was pretty much no excuse for missing this.

Picture this: a bungling bunch of ghost-busting buffoons in the UK’s most haunted house, updating each other on their Eldritch findings over Zoom. Directed by Shaun Chambers, this was essentially a light-hearted version of the “Blair Witch Project”. In fact, Zoom meetings are very much like séances: “Bob, are you here? Make a sound if you can hear us… is Barbara with you? We can’t see you, can you hear us?” What was really going on in the haunted house that night?

The familiar faces of Robert Stuart Hudson, Kathryn Chambers, Rob Hardie, and Vikki Earle formed the funny-boned cast. Regarding the collective performance style, they played to their characters from the previous plays, supplementing them with behavioral traits relevant to the plot, for example Sharon’s flirting and Lorraine’s eccentricity. The actors never fail to demonstrate commitment to their inflated performances. Spicer’s writing was at its funniest when Carter’s jargon-loaded and prolix speeches clashed with Sharon’s Northern, blunt and “tell it like it is” humour. There were a few one-liner gems in the writing tonight prompting bursts of laughter, like when Sharon asked Lorraine, the Medium, “What’s it like to be dead?” She replied: “You live with Carter, you tell me!” You had homophone humour in the example of the ghosts complaining to the living souls who shouted at them, saying: “We are dead, not deaf!”

My only minor criticism would be that one or two scenes felt like they were drawn out to add time really; there were a couple of passable moments. I also thought the occasional delay whilst using Zoom, because of the signal strength, affected the pace of some scenes - but technology was to blame for that one. On the other hand, this production was certainly aimed at 12+ (as advertised) because of the hilarious profanity which made the Northern comedy punchier.

All things considered, it was once again another enjoyable play from a cracking team of cast and creatives. The production featured: a spooky lighting design, a playlist of silly and sinister sounds, and deplorable ghost-hunting equipment. I think Northern Comedy Theatre can approach any subject or theme and put their own spin on it.
Reviewer - Sam Lowe
on - 1/11/20
at November 03, 2020