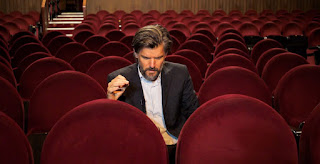 Sitting on his own in an empty theatre auditotium, Ben Duke tries to explain to a future audience what the experience of 'theatre' really was. The premise being that due to coronavirus, the world had moved on from social mingling, and being close together with strangers was most definitely a thing of the past. Everything now had gone digital.
How would you explain to a blank camera screen what a theatre was, what it was like, how an audience gathered, entered, sat, mingled, and what happened on the stage? How would you explain to inanimate objects - tell people who may or may not be watching / listening to you, and certainly not engaging in and with you in the same way as you do with live theatre, that you would sit close by complete strangers sharing only one thing in common... your love of theatre and admiration for what you watched happening on stage; and then you would walk away from each other not speaking and never see each other again?
Duke allowed himself to get a little carried away when talking about what actually happened on the stage itself... but then again, that's the beauty of theatre.. anything is possible and whatever you imagine can happen.
In this single-shot 16 minute film, Duke presents a sensitive but rather timid persona, unsure of what to say and how to say it. It is believable and feels real; it comes from the heart, not from the page. Yes, there is (as the press-release says) 'self-deprecating humour', but it is far more subtle than that; he mourns the loss of nearness, communication, touch, connections, and it is a watchcry to the government that our industry is very near this state already.
A surprisingly effective short which, despite the static nature of the film, has somehow managed to take the listener / viewer on a journey - a journey of the imagination: and that, my friends, is what theatre is all about!
Reviewer - Matthew Dougall
on - 23/9/20
at September 24, 2020