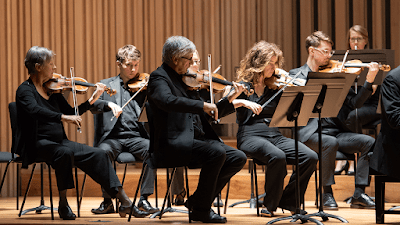 Living in Scotland, away from 'civilisation', I rarely have the opportunity of seeing live theatre and music, and so during this 'lockdown' I have been utterly blessed and amazed by the amount of live performances that have been made available for us to view online. For me this has been an absolute blessing, and I hope it will continue, although I suspect that once things go back to normal again, the online concerts will also stop, which will be a real shame if I'm being selfish.

Yesterday I had the good fortune to watch a concert given by The Northern Chamber Orchestra, who are based in Buxton (I think!), and give regular performances at The Stoller Hall in Manchester. I had never heard of this orchestra before, but I am now an instant and huge fan! I like classical music very much, in fact it makes up a good 70% of my playlists, but I am also a bit of a heathen too, since I only realy know Beethoven, Bach, Mozart and Tchaikovsky, and am not at all knowledgeable. I just know what I like!

The Northern Chamber Orchestra performed wonderfully. They don't use a conductor - something I hadn't seen before! - and yet their togetherness and timbre (I think that's the right word) were lovely!

The concert started with the opening movement from Grieg's 'Holberg Suite', and this sounded fabulous. Considering there was such a small number of players on stage the quality of texture was, to use a word my Welsh friends often say, lush.

The second piece was conducted by its composer, Stephen Barlow. It was called Nocturne For Clarinet, Marimba and Strings. I feel sure that the ensemble must have played it perfectly, and indeed Barlow seemed extremely happy at the end of it. To my untutored ears, it didn't sound anything like a 'nocturne', it certainly diddn't put me in the mood for sleep, in fact just the opposite. Adjectives such as 'abstract' and 'Hitchcockian' came immediately to mind. There seemed to be no real melodies, nor any real emotion with the piece. Perhaps that was intentional. I am simply unable to get into modern classical music, it is all very much beyond me, and doesn't give me pleasure to listen to. Hopefully though, it was delightful to those who 'understood' the music. I think maybe that's where I'm going wrong. For me, music has to be an emotional response, and I think majority of modern pieces require an intellectual response.

The next piece I enjoyed much more. It was still very contemporary and modern, but there was melody, jazz, dance music, emotion, even humour in this piece. It was called, "Now You Hear Me, Now You Don't", by Austrian composer Kurt Schwertsik. The piece required the string orchestra plus again, the marimba. Playing the solo marimba part was again, Colin Currie. The piece was in four short movements and each had its own character. The first sounded a little like Bach, but modernised; whilst the second was full of jazz chords. The third movement was a love song, and the final one a gallop!

The next music to be played was by Delius. Unlike Schwertsik and Barlow, I had already heard of Delius, although if you'd asked me to name any of his compositions I wouldn't have been able to. Here the orchestra played 2 Aquarelles, which were written in 1932 and orchestrated by his friend Eric Fenby. I liked listening to these two short pieces. I have no idea why but in my mind's eye I was in an art gallery looking at a Renoir whilst this music was playing in the background.

The final piece of music on the programme was the only piece of music that I was familiar with both the composer and the piece! It was Dvorak's 'Serenade For Strings', and I only knew about this music when, years ago, I went into a record shop wanting a recording of Tchaikovsky's 'Serenade For Strings' and picked up a record of the Dvorak by mistake. I have loved the music ever since, and even prefer it now to the Tchaikovsky! It's in 5 short movements, it's rich, romantic, tuneful, and oh so easy to listen to and get lost in!

The Northern Chamber Orchestra certainly are extremely talented, and play with accomplished skill and love. I wouldn't even know how or where to start without a conductor. Simply amazing!