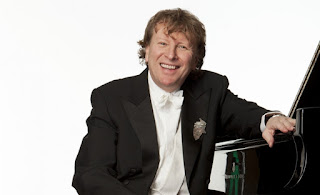 The Chetham's Piano Festival and Summer School continued this evening with a concert from the enigmatic and charmingly eccentric talents of internationally renowned pianist Piers Lane.

Lane started with an introduction to the pieces he had chosen. Most unfortunately though I was unable to hear the vast majority and caught only the odd word. I was sitting on the back row of the auditorium and he spoke quietly and without microphone. Such a shame. There was also another intro / explanation about the final piece of his concert too, and again, I missed out on what he had to say.

His first piece was a prelude and fugue by Bach, which was swiftly followed by pieces by Chopin; Impromptu No 2, and three Nocturnes.  I am not a fan of Bach's music (yes, strike me down now if you wish... but we can't all like the same things. He is far too mathematical and rigid for my tastes... however..) and the Nocturnes were certainly doing their job and sending me to sleep. It was the third concert of the evening and the atmosphere quite warm. The playing of these pieces though was utterly beyond reproach, and Lane had a superb relationship with the keys. Beautiful phrasing and masterly technique combined to great effect in all of his pieces.

His final piece though was what brought me out of my slumbers. It was a work for the piano by Tchaikovsky, and a composition that I had never heard of, despite being a fierce Tchaikovsky lover! This rare and seldom-performed work was written in the middle of  Tchaikovsky's career and after completion dedicated the work to his friend and fellow pianist / composer Anton Rubenstein. The work was '6 Pieces on a Single Theme'. The theme was a folk melody (entering first as a prelude) which Tchaikovsky had cleverly reworked into a Bach-like fugue, a funeral march, a lively dance, etc... and even though this was a rather naive composition in many ways, you could easily hear the ideas and melodic structures which were paramount in his large symphonic works. An extremely interesting piece of music and am so privileged to have heard it played by Lane, a pianist who clearly understood the music and the man behind the writing.

As an encore, Lane delighted everyone, including myself, with something of a curiosity piece. In fact, I have never heard anyone other than the composer of this piece play it before, and Lane made no apology in parodying it. It was Dudley Moore's 'Colonel Bogey In The Style Of Beethoven'. Proving that even classical piano music can be hugely comedic and entertaining. It was hilarious to watch Piers Lane being Dudley Moore being Beethoven! It was a truly bravura finish with brash chords and a flourish. From a rather inauspicious start to this concert, Lane had pulled it round completely and as he left the stage after his final bow, I was willing him to return to play more. Brilliant!