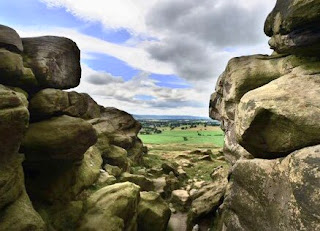 'Imaginary Friend' is a short 11 minute film, shot on location in the beautiful Yorkshire Dales, and was first shown at a film festival in New York in 2010, and has since seemingly gone under the radar somewhat. That's a real shame, since it is a beautifully constructed film both in terms of narrative and mise en scene.

Without giving away too much of the story, the protagonist, Pauline - played with real earnestness and conviction by local actress Maxine Peake - appears to be talking to her friend, Margery. The only problem being, Margery is to all intents and purposes a figment of Pauline's disordered mind. 'They' take a bus journey up to one of the more famous rock formations where they admire the view, that is until the unseen Margery decides to do something stupid and is given a rare old telling off from Pauline.

It is the film's surprise and interesting ending though which makes the film even more noteworthy. In today's society when mental health issues are being tackled and researched with much more alacrity than ever before, and when raising awareness of such conditions is not only more prevalent but also laudable, this is a film which more people need to watch.

Combined with lovely locations from within 'The People's Republic Of Yorkshire', beautiful cinematography, background music which does not intrude but ameliorates and accentuates the mood excellently, and tight, uncompromising diecting from Ian Bevitt; this is not your average short at all, but a cleverly and lovingly crafted piece of cinema by true professionals in every aspect of the film's production.

The biggest surprsie for me was the writer, Reece Dinsdale. I first came across this talented actor in a sit-com with John Thaw, many years ago, called 'Home To Roost', which my mum used to watch religiously; and I have since seen Dinsdale on the stage a couple of times at The West Yorkshire Playhouse (now renamed The Leeds Playhouse). However, he seems to be also extremely talented as a screen writer too, if this is anything to go by.

A thought-provoking drama which is deliberately kept quite light, raising as many questions as it answers, handled with punctiliousness, which deserves a wider audience.