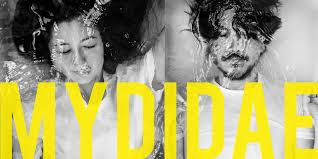 Wonderhouse Theatre Company started a run of the relatively new play Mydidae as an antidote to Valentine’s Day, and indeed it was no rom-com. The play, by Jack Thorne who wrote Harry Potter And The Cursed Child and has worked as a screen writer for Skins and This Is England, is about domestic violence and child loss and focusses on the relationship of two ordinary characters. It is set entirely in the bathroom of their family home and while you can try to find deeper meaning to the symbolism of the bathroom, it really is quite a simple play where you can take everything at face value. This is due to the very natural dialogue, which must be a gift for the actors. We watch the story unfold over the period of a day – couple Marian and David share jokes and voice random thoughts to each other as they get ready in the morning. Hollie-Jay Bowes as Marian presents a familiar character with a complexity well balanced with a protective detachment which is well matched with David Gregan-Jones’ portrayal of David – a cheeky chappy whose chirpiness masks insecurity and neediness.

We learn with not much detail that the couple have lost a child and we suspect that it is the anniversary of the child’s death. We are told of events that are to happen that day – David has an important business pitch with a client, Marian arranges to visit the grave of their child with her mother.

The story moves from morning to night where an unexpected narrative unfolds. We find David naked in the bathroom, having run a bath and lit candles – the setting for a romantic event. Marian is surprised by this and we are given a very brief, and singular glimpse of how she truly feels – deep sorrow and tears are expressed for a fleeting moment before she puts on her mask again and does as David bids. They share wine in the bath together but the intimacy of this scene reveals awkwardness between two strangers rather than a connection or closeness. The tension builds and David’s true intentions are revealed leading to a shocking attack. Well, I say shocking but really the action is subtle and is not sensationalised which makes it all the more frightening. We are flies on the wall watching two very real and normal people in a domestic situation without the need for dramatic conventions or techniques to tell a story, explain a character or portray an issue. The nudity is not symbolic of fragility, the bathroom is not a symbol of the characters inner state – the realism and naturalism of this play is startlingly effective. In saying that, there is a layer of subtlety and depth if you want to find it.

Some have criticised this play because they don’t like how Marian reacts in the aftermath of David’s attack, they say that Marian’s character would have reacted in a different way but I think they are missing the point. Mydidae is not a play that aims to challenge behaviour, highlight issues or provide some social commentary, it is, quite simply, a story.

Mydidae runs for another week at Hope Mill Theatre and it is well worth the watch.