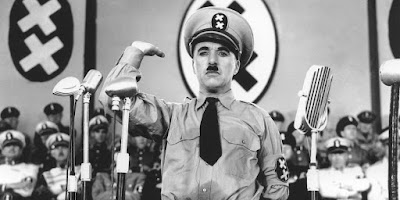 I’ve had a rather bad run of reviews lately and was beginning to wonder if I had become bitter and jaded in my approach to the assignments I had been given. Fellow patrons and the pretentious affectations of the material I have seen had incurred the wrath of my misanthropy. So tonight I was relieved to be reviewing in the safe hands of Charlie Chaplin’s classic film, but still rather concerned that I was unfamiliar with the venue, screening conditions and fellow patrons in Altrincham’s Little Theatre. Would my stereotypical bitter reviewer alter-ego show his ugly, pessimistic self again or would I finally snap out of my negative funk?

Upon arrival, I was greeted like a VIP by The Manchester And Salford Film Society's secretary, (they loan the venue for their screenings) which might have seemed like it was because she knew I was reviewing, except that the same warmth and enthusiasm had been afforded the paying guests before me. We were invited up to the bar to meet the other society members and guests and to introduce ourselves to two longstanding members. Instead of partaking in the convivial pre-screening meetup, we wandered into the auditorium to wonder at its décor. Able to host up to 140 punters, in old timey (but well upholstered) seating, with a lovely proscenium framing the screen, this was a mini Cinema Paradiso all of its own.

The screening was preceded by a lively 15 minute introduction which, enthused so passionately, that any chance of resisting the film’s charms had been fully exorcised. Screened on a digital projection from a Blu-Ray/DVD (I didn’t check the exact format) the image and sound quality was excellent as well, so these were prime conditions in which to enjoy Chaplin’s 1940 classic for the first time.

The Great Dictator showcases Chaplin’s usual thematic tics, poor social conditions, the law as boorish and bullying, mental health (and institutions) and a humanistic optimism that compassion will one day succeed. But Chaplin’s first full talkie reveals so much more about his development as an artist. Firstly it has an awkward and rather primitive sound design, with some bizarre omissions of foley and wildtrack sound that render some scenes quite alienating. However, Chaplin finally pieces together a narrative which flows with cause-and-effect as well as character development with much more ease than his previous work, which I always felt suffered from an episodic, set-piece structure which lacked a strong through-line. Here Chaplin’s parallel narrative of Adenoid Hynkel, the anti-semitic dictator, alongside the story of a persecuted Jewish barber is brilliantly pieced together, with so many scenes eliciting laughs that the running time flies by. Another development is in revealing Chaplin’s verbal skill. One exchange is as follows; upon hearing that the barber is a Jew, his friend exclaims, “Strange, and I thought you were Aryan.” “I’m vegetarian” comes Chaplin’s brilliant response, as though straight out of a Marx Brothers’ script. Aside from the wit of the script and his excellent verbal timing, The Great Dictator also showcases Chaplin’s vocal skill with hilariously spoofed German language in Hynkel’s rallies. In the final speech of the film Chaplin achieves many things; firstly he returns to his common technique of just telling the audience the message of his films, which I feel can be an underrated quality in filmmakers (Chaplin’s intertitles in previous films such as Modern Times suggest that he is quite the polemicist when he wants to be), secondly that his passionate, remarkably prescient oration is a great piece of writing that deserves to be shared for generations to come, and thirdly, that in contrasting this monologue with the maniacal posturing of Hynkel’s speeches, Chaplin is an actor of considerable range and sensitivity. To watch The Great Dictator in such a lovely setting and in such lovely company, was an utterly thrilling experience.

The screenings start at 7:30pm on selected Saturdays, but don’t be fooled by this, nor the film’s stated run time. Manchester And Salford Film Society events start at 7pm sharp in the bar, where you will meet like-minded and friendly film fans, and the society’s post-screening drinks are a must. Saturday nights with the Manchester And Salford Film Society are more than just film screenings, they are a complete night out.