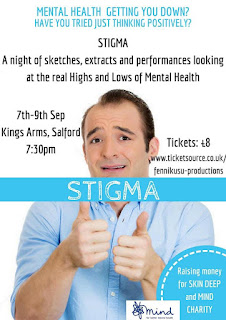 In reviewing this, I am, not to put too fine a point on it, in a quandary. First, I have to admit, due to an oversight in my not reading the advert fully, wasn't aware that the event was a charitable one, and all the performers in the event were all current or past sufferers. Further, I didn't realise that over the two hour period (including interval) there would be 10 'acts' very much in the style of a variety evening, including stand-up, performance poetry, song and monologues. In my blissful ignorance I thought it to be more in the form of 4 or 6 short plays [like a J B Shorts evening]. Just goes to show that when tired and busy, details can get overlooked!

Fennikusu Productions is a newly formed production company set up specifically to work with performers who are suffering from any of the many and varied mental health issues that plague many of us within the industry, and to allow them to have a voice and raise awareness of these issues to all. Hadesa Sonne, founding member of Fennikusu said that the idea behind this 'showcase' isn't to make people feel sorry for the performers or the issues they struggle with, instead they just want their voices to be heard, acknowledged and properly understood. As the tittle of the show suggests, those who are struggling with mental health issues do feel stigmatised and indeed the government still struggle to recognise certain types of illness as such and fail to prioritise mental health on their agendas; maybe because it is an unseen and therefore 'unknowable' quotient. Mental health takes many forms, not just those we all know such as Alzheimer's and other dementias; but there is anorexia, anxiety, ADHD,depression, bipolar, etc etc...

Despite my misinterpreting the evening beforehand, I have to admit that once there all that was forgotten. It was  hugely enjoyable event with a varied and entertaining programme. Sonne started the evening herself with a song wearing a full-face plain mask. It was obvious what the message was here, but since no mouth was open in the mask, the lyrics went indecipherable. This was followed by one of my favourite items in the evening; an extremely well written (Ann Brown) and directed (Simon Naylor) monologue entitled 'Green Door', performed by Ann Brown. Just the right length and a lovely story and nice tag.

Another highlight of the evening were the comedy songs of Abey Bradbury, who accompanied herself on the ukelele. Comedy songs are a difficult beast to pull off, and of course the most famous of all masters in this artform was the late great Victoria Wood, and now Tim  Minchin seems to hold the top slot. However, Bradbury's were very different from Minchin's and her approach, rapport and voice were pitched perfectly.

Perhaps the best acted this evening was a long monologue by Clarke McWilliam titled, 'Someone's Got To Do It'. It was performed by an actor who took his inspiration from both Alan Bennett and again, Victoria Wood, and found himself a wonderful little character which we all immediately sympathised with. Directed by Emma Bird, this was a truly amazing portrayal of a timid toilet attendant with issues, and performed to a Tee by Pete Gibson. My only feeling was that the piece itself was too long. Had a good few minutes been shaved off this piece, it would have been simply perfect!

Other items on the menu this evening were some humorous performance poetry from Rosa Wright, who, curiously introduced herself as 'a poet, performer and professional weirdo!'; stand-up comedy by Matthew Seber, who made the sobering comment that many of the homeless on the streets of Manchester are there because they have mental health issues which have either passed under the system's radar or the council simply doesn't have the correct help available for these people. Sarah Wilkinson performed two short monologues, both nicely handled and well presented whilst the evening finished with the only piece of theatre that wasn't a solo performance; an extract from a play by Sonne called Skin Deep.

The show, being performed over three nights, is raising money for MIND charity as well as finding a voice and a platform for the many and multifarious creatives out there who struggle with their mental problems adroitly and uncomplainingly. I am extremely grateful to the company for allowing me to go and cover this event; it was most illuminating and highly worthy.