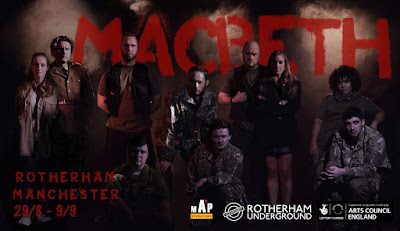 Manchester Actors Platform, whose base is 53Two, have teamed up with Rotherham Underground, a  new performing arts hub and theatre company from the South Yorkshire town from whence I hail, Rotherham. MacBeth is their first venture and given it is widely regarded as Shakespeare's finest tragedy, they certainly set themselves a formidable challenge. Oh and just to add to that it was performed outside in Angel Meadows Park. My interest was piqued as soon as I read all of the above. Non-traditional theatre spaces (as we know now) are not explored enough and Shakespeare lends itself beautifully to the outdoors.

As I approached the ‘venue’ I could see what looked like an army camp, this Macbeth is set in post Brexit Britain and the UK has separated in to warring factions each vying for control. As I settled on to the grass and listened to the sound of motorbikes roaring by I wondered if the traffic would pose a problem, it soon became apparent that this was not the case as we were immersed in to this would of treachery, greed and murder. The pace, projection and communication from all the actors allowed the audience to fully connect with the narrative from the beginning. It managed to convey a contemporary feel whilst staying true to the rhythm and language of Shakespeare.

Macbeth (Simon Naylor) and Lady Macbeth (Alexandra Maxwell) were reminiscent of a contemporary power couple and she used her sexual prowess and his obvious lust for both her and power to persuade him to murder the King in cold blood. Naylor portrayed Macbeth's inner turmoil with intensity juxtaposed by the calm and collected Maxwell. It was then fascinating to observe the switch in their characters as the play progressed. Supported by a strong ensemble that mutli-rolled the other parts with ease including Benedict Fitzgerald from the Rotherham  Underground’s Young Rep Company, who was making his professional debut. Ethan Holmes as Macduff particularly shone in his performance and his portrayal of the discovery of the slaughter of his wife and children was utterly heart-breaking. There were some wonderful visual imagery using smoke and fire which added to the drama of the piece beautifully. The fight scenes were choreographed superbly and executed perfectly by the cast which, is not always the case. Director Alice Bartlett created a production which thrilled and engaged an audience on a rather chilly September evening in Manchester, so much so that I, for one, forgot where I was for the entirety of the show.

This production reignited my love for the ‘Scottish play’ and I left feeling as though I had forgotten just how fabulous it is. I think Rotherham Undergound has a bright and fabulous future and maybe next time I’m ‘home’ I’ll see something of theirs on their home turf.