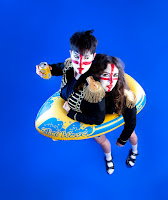 Rebecca Biscuit and Louise Mothersole are angry and passionate performers who, in typical Sh!t Theatre style, mix a very modern, edgy, punk style of storytelling with a multi-media presentation concerning a political issue.

As we enter HOME's Theatre 2 space, the stage is set as a bar - the words "The Pub" written on the bar side, and we are offered a free glass of beer and some cheese. The screen above flits between Karoake lyrics and images of North African refugees in the Mediterranean. One side of the stage is the Naval "White Ensign" whilst opposite it on the other side is the flag of Malta. Between these two flags, these two young ladies in quasi-military garb and their faces painted with what could be either (or both) the flag of St George (representing England) or the Maltese Cross.

The story is, ostensibly, that Biscuit and Mothersole had been asked by a lady / organisation (we shall as they did call her Charlie) to go to Malta and perform a one-off show in "The Pub" (yes, it is actually called just that) in Malta's capital, Valletta. [European Capital Of Culture!] And we also get to 'meet' local ex-pats and regulars of the pub too! However, they also seem to have a secret and more important mission,; namely to find out about Malta's political stance on the mass migration of North Africans travelling to and through Malta as refugees, and how the Maltese government treats these refugees.

It's a very bold premise, and combining humour with a very upbeat and modern presentational style - as well as drinking copious amounts of both rum and beer throughout - they tell their story of travellling to Malta, their experiences at 'The Pub' and another, more seedy estamina out of town, and their endeavours to both rehearse and perform their one-off show (which must not contain any political or contentious material!) and investigate their second brief in order to present the show they did for us this evening.

Combining two-part harmony singing of British sea shanties and folk songs (with different lyrics), as well as crowd-surfing, boozing, Oliver Reed anecdotes, and teaching us some Maltese, this was a highly original piece of theatre. Yes, it was humorous and punchy; but there was also a hard and important message they needed to impart. This was done through the juxtaposition of images and information about the refugees and their situation both prerecorded on the screen and spoken verbatim by the two actresses, of real cases, real newspaper articles, real events, real people. The message hits home.

The show is advertised as being one hour, however this evening it did overrun somewhat and I did feel that the last 10 to 15 minutes of the production was adding nothing and they had run ourt of steam.

This is Agitprop Theatre for the 21st century, passionately and meaningfully performed.