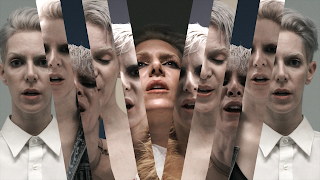 Arêté is a non binary identifying, androgynous and LGBTQI artist. Entitled ‘Trip’ the video takes viewers on a ride through the life of an individual that deals with multiple personality disorder after a toxic relationship forces her into this state of distress. Paralleled with a hallucinogenic trip, the music video gives and accurate description of how multiple personality disorder can affect one’s daily life. Sonically her signature style exemplifies experimental soundscapes fueled with electro-pop components.

Androgynous, adventurous, assertive: areté. Challenging expectations through avant-pop music and provocative visuals, this NYC-native combines poetry and evocative choreography with a fresh take on an electronic dance-inspired sound. A spiritual descendant of rebellious game-changers such as Bjork, Grace Jones, Patti Smith, and Laurie Anderson, areté draws from their background as a director of theatre and film to thrill your senses and subvert your expectations. Pulling from their experience in Los Angeles' queer underground dance scene, areté creates their own brand of unrestricted, experimental art.

Leading single ‘Trip’ carries the feeling of the future past, fusing elements of Runaways, Iggy Pop and other synthpop/new wave such as the Pet Shop Boys and Frankie Goes to Hollywood. Highlighting stomping electronic beats, ethereal vocals and dreamesque soundscapes, the track takes listeners to another dimension.

The visuals showcase areté’s signature style of experimental, surrealist and expressionistic storytelling, narrating areté’s origin story. When aspiring actress Cassandra Hardt relocates to Los Angeles she gets caught up in a roller-coaster romance that ends with her in an institution, accused of a murder she can’t remember committing. ‘Trip’ flashes back to the beginning of the relationship, the beginning of any troubled relationship - the thrilling feeling of heading up to the apex of the rollercoaster, ultimately knowing the descent is ahead. ‘Trip’ is about escaping, filling up your void with sex and drugs and feeding your inner adrenaline junkie. Cassandra is a character and a character begins in one place and ends in another - ‘Trip’ is the beginning of Cassandra’s journey into herself.

The story itself is inspired by areté’s traumatic “me too” experience - it centers around a woman who allows a man to convince her that she has multiple personality disorder. The story is dramatized, including cinematic elements like murder and institutionalization, but the experience is universal. areté confides, “Nearly every woman and queer person I know has been in a relationship with someone who controlled them, whose needs became more important than their own, who destabilized and - in truth - emotionally if not physically abused them.'' ‘Trip’ acts as a reminder to focus on the process of taking command of your own voice.

areté’s upcoming EP Cassandra is the first of a series of surreal concept albums with interactive narratives. Immersing the audience in an alternate universe via performance, sound, digital and visual art, areté transforms your perspective on reality.


areté is ready to reveal her origin story: Cassandra's metamorphosis.