THEATRE REVIEW: The Empathy Experiment 2:0 - The Theatre, The Library, Oldham. 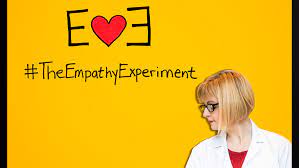 So much has changed since the pandemic and so have Rose’s feelings towards her own work, which this show took apart and examined, using humour and lots of audience interaction to make for an intimate and sensitive performance.

The audience was greeted by Condo on stage, hard at work on her laptop, a projector screen behind her informing the audience they could engage by sending her a tweet with word suggestions. The show then began with Condo addressing the audience through her laptop, projected onto the screen above her, as though on a Zoom call. Eventually Condo turned from camera to audience and there was the palpable relief of not interacting through a screen, which was addressed throughout the performance.

There was a heavy amount of reference to the original piece ‘The Empathy Experiment’, had an audience member been unaware of the original work, I wonder if their level of engagement with this show would have been inhibited. I personally remembered the evocative effect of having my mobile taken from me, sealed in a small white envelope and taken up onto the stage in a basket with everyone else’s mobiles. During the original there was the frustration of trying to stay tuned to Condo’s fast paced delivery of spoken word while worrying about the safety of my device. Though 2.0 delivered the same enjoyable style of spoken word from Condo, I missed the emotional challenge the previous performance had played with.

Condo is a master of interacting with her audience, very controlled, in that she had the audience send her tweets with words that she sporadically used throughout the show, a power-point that we could interact with through our smart phones and clapping and mouth noises.

Though I enjoyed the spoken word and interactive nature of the 2.0 show, I spent a lot of time during and after the show reminiscing about how much more I had enjoyed the original, the evocative effect of a stranger taking my mobile and me complicitly handing it over and then sitting there trying to enjoy her performance, whilst seething that I had been separated from my device like a school student.

This was the final performance of 2.0, a reflection of what most of us performers have been through in the past two years, plans that had taken years to align were dashed by the horrendous global pandemic we all endured. Those that were personally affected maybe not feeling the same about their creative processes or past works anymore, there will be a plethora of works about the pandemic and the ongoing affect it will have on the art scene and ‘The Empathy Experiment 2.0’ was a very poignant moment to reflect with a very gentle delivery by the wonderful Rose Condo.