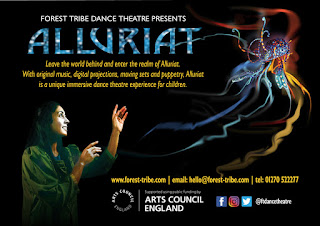 What happens when two young friends are separated by high winds and drown, and how do they survive and eventually manage to find each other and reaffirm their friendship again? Inspired by a poem of the same name by David Freedman, Alluriat is a non-verbal theatrical presentation aimed at children in 'Key Stage 2' schooling (ie.. the 7 - 10 year olds) to open them up to the possibilities and beauty of the Arts. I suppose there is also a nice 'tie-in' with them chosing to perform this touring show within a library too, as this work started life as a poem, and, as there is a huge need to try and peel children away from electronic screens and interact with the real world, books and libraries are a perfect place to try and make that happen.

Conceived and directed by Debbie Bandara, the performance lasted about 50 minutes (just the right length of time for this age group) and ultilised just two performers; Purvi Parmar and Jennifer Kay.

The story was told thrrough various media, everything from contemporary dance (which although I found thrilling and excellent, majority of the children found rather amusing), many different kinds of mime, puppetry, and, most impressive of all, a dizzying array of FX, LX and SFX. For a small-scale touring company working in the TIE market [Theatre-In-Education] then to place so much emphasis on such things as holograms, projections, sound and lighting effects, and to make them such an integral part of their production was really quite remarkable.

My only criticism here was that on the performance I witnessed the images projected were simply not defined or clear enough. This was due wholly to the fact that too much light was coming in from an adjacent large window in the library building itself. Had we have been in a theatre-setting or been able to have blacked that window out, then we would have had the effects in all their undoubted glory.

Both Parmar and Kay proved to be very enigmatic performers and their ability to tell a rather abstract story concentrating far more on 'emotion' and 'feel' rather than narrative was impressive. Their engagement was total and the children lapped this up, and were always very keen to volunteer or be a passive part of the proceedings. In fact, the interaction with the children was lovely, but perhaps too front-row centric, but certainly well-intentioned, and their favourite items (well, mine at any rate) were certainly being the face of a large fish and watching the antics of a puppet crab.

With positive themes and messages throughout, and yet not without its drama [the thunderstorm and drowning was detailed and clever] Alluriat was a lovely way to involve and nurture children and their participation in and love of the Arts. I feel there is still room in there for a little more audience work - maybe putting the audiience in a semi-circle and acting around and even behind them where possible. However, I have seen countless children's theatre productions over the years, and have never seen one before which has created a non-verbal piece of such intricacy and spent so much effort in creating a truly holistic sensory experience.