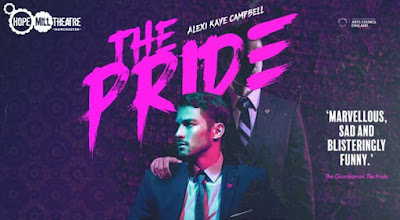 Green Carnation Company is a new theatre company that, in their own words, is dedicated to producing high quality productions that tackle contemporary issues affecting the queer community. This evening they premiered their first ever production, The Pride, at the award winning Hope Mill Theatre in Manchester.

While there is always a warm welcome at Hope Mill Theatre, it was really nice to see the members of the theatre company itself welcoming the audience and the excitement about this first opening night was palpable.

The premise of Alexi Kaye Campbell’s 2008 award winning play has the potential to be quite complex – it begins in 1958 and explores issues related to social and internalised homophobia of that time but then fast forwards to compare the same issues in 2008. This is exposed through three central characters – Oliver (played by Simon Hallman), Philip (Gareth George) and Sylvia (Joanna Leese). In reality, there is no complexity at all in the clever weaving of scenes and going backwards and forwards in time creates a very interesting – and accessible – juxtaposition of the issues explored.

This requires some skill as a writer but also as a director and Dan Jarvis and Dan Ellis, Director and Co-Director respectively, certainly were able to present a clear and well paced narrative.
The dialogue was quite eloquently written – the characters are clearly well educated and well to do, and speak in a middle class manner and I expect that this would be a great play to read and read again. There were quite a few fantastic lines which, while clearly with literary value, were easily delivered and sounded quite natural. This, again, comes about from the gifted writing by Kaye Campbell, but also the characters themselves, made flesh on stage, translated these words into natural, understandable dialogue in such a way that they made the craft of acting look easy. Facial expressions, posture, gait – all of these non-verbal characterisations created by the cast made every word plausible and hit home. A mention here must be made of Alex Thompson who was cast as several different minor, but challenging, characters. He almost stole the show through his exposition of strong, three dimensional characters that were so different from each other. His transformations – through no trickery of make up or gimmick - were quite something to watch.

I wondered at times, though, if some of the nuances of the dialogue between the two central men were passed over, particularly in the first scene. Some of the lines between Philip and George lost an underlying meaning. The complexity of these two closeted gay men meeting for the first time was not fully explored, the only emotion between them was a rumble of passive hostility from the part of Philip and a passivity from George, whereas the dialogue could have been interpreted with stronger hints of the struggle – internal and external - of attraction and rejection. There is a clear moment towards the end of this scene when Sylvia feels something has happened, like a premonition of the connection between the two men, but really this moment is not witnessed by the audience and I believe the dialogue could have allowed a variety of subtle emotions to lead us to this moment. Of course it is the director’s prerogative to lead a play as they see best and it is easy for anyone to be a back seat director – this interpretation of The Pride was indeed excellent and of a very high calibre and did not in any way lack in portraying real, believable characters with their story to tell. It is a fairly long show that explores quite a variety of complex issues around sexuality but there was a great pace and flow and it all made perfect sense. This is difficult to achieve and it serves to underline here the great potential that Green Carnation Company has. I want to see these actors on stage again, I want to see what this company does next because it really took us all on the journey that was played out on stage.

Music was subtly used at times to add emotion to some moments but there was no consideration of a stylistic theme for the music – it was disparate and unoriginal but it did underline different emotions effectively. Likewise, sound effects – mostly ambience sounds – were random but effective. In one scene we hear rain softly falling from outside, but in another scene rain is mentioned but is not heard. These are small details, but it is in the detail that high quality productions are recognised.

The set was quite simple but really effective, particularly in representing the past and the present in a neat way. Some of the transitions seemed a little clumsy and at times there appeared to be hesitancy, particularly around the use of curtains on set. I think that there was some symbolism to be had with the drapes and curtains, which were used as backdrops, but this symbolism was lost – sometimes the curtains were tied back, sometimes they weren’t, sometimes they showed odd gaps. If there was an intended symbolism, it was lost. If there wasn’t, then the curtains were simply a bit messy and distracting. These kinds of thing can be put down to opening night glitches and can be easily overlooked – it is the quality of acting and the interpretation of the script that are most important and for Green Carnation Company these were really excellent.

Green Carnation Company, named after a Victorian secret symbol of homosexuality, has an aspiration to deliver productions of a high quality and indeed the acting and delivery was flawless. Perhaps a few more shows, and maybe more funding, will allow them to elevate the music and scenery to the same high level as the acting.