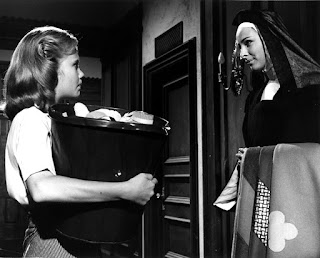 Made in 1966, and notable for being Hayley Mills' first film away from The Disney Corporation, it is a rather bland and nowadays extremely tame story of two girls going through their final three years of high school at an exclusive all girls boarding school run by nuns.

As you might expect, this is billed as a comedy, but the comedy is few and far between and very gentle at that. If it's St. Trinian's you are after then give this a wide girth. Nothing really quite surpasses an Ealing Comedy and their ilk in truth. However, there is some rather lovely acting, especially from Mother Superior (Rosalind Russell), whose acting was such that despite the lack of visible body - a nun's habit makes it very difficult for corporeal acting - her eyes were in the zone all the time and one could really gauge emotion and reactions from them alone.

Further this film is suitable for all ages as the story is also quite moralistic and sees Mary (Mills' character) transform over the course of her three year stint at the school from unruly, ne'er-do-good, always up to mischief, to realsising that a nuns' life is actually one of fulfilment and contentment. Predictably, she opts to stay on at the establishment as a novice, much to the disappointment of her side-kick of the last three years, Rachel (June Harding).

Another reason for my wanting to watch this film was the small cameo role of Mrs.Phipps, a voice and deportment teacher who steals her only scene in the film with ease, and played by Gypsy Rose Lee.

The film stands as a curio of the times, and may have more relevance to anyone who was a pupil at a Catholic school run by nuns in the 60s. Directed by Hollywood stalwart Ida Lupino, it felt very sluggish, dated and predicatble by modern standards, and stands as a reminder of just how different schooling, morals, and ethics have become in the last 50 or so years, and not always for the better.