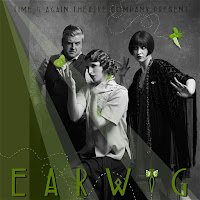 In classic 'Time And Again Theatre Company' fashion; their new play 'Earwig' evokes a vintage style and brings to life a time forgotten. In this case, we are taken back to the roaring 1920s, to the era of silent movies and flapper girls. Written by Laura Crow, 'Earwig' tells the tale of a deaf woman with a keen eye for classifying insects, living in an unhappy and overbearing marriage that frowns upon women doing such things. This play is about Marigold’s fight to be heard in a world that doesn’t understand her lack of hearing.
The use of projections was very clever and well designed by Laura Crow. The comical insights told via the projector were almost like another character, creating an instant relationship between audience and screen. And well done to the technician Tim Cooper for succeeding in making a complex array of sounds and slides fit so seamlessly into the 60-minute play.

Directed by Catherine Cowdrey and Samantha Vaughan, they utilised the small performance space and despite the staging being minimal, their use of movement and mime told Marigold’s story effectively and emotionally. It is no easy feat to successfully engage an audience and have them emotionally invested in the characters in such a short time frame, but Cowdrey and Vaughan, along with a superb cast, achieved this seemingly effortlessly.

The cast of three comprised of Laura Crow as Marigold Webb, Jessica Ayres as Mrs Meadows and Bryony Varden and Ben Hynes as Thomas Dollman and Nicholas Webb. The cast had a strong dynamic and complimented one another’s performances. Ayres and Hynes switched between their two characters seamlessly and with no confusion from the audience. All five characters were realistic and dynamic. A great first performance from Crow, Ayres and Hynes. A lot of work has gone into this new production, with some of the cast even learning sign language and displaying it with ease.

As this play continues at the Manchester Fringe and then moves on to the Edinburgh Fringe the cast alternates between the three mentioned above and a second set of actors (Robyn Greeves, Beth Nolan and Adam Martin-Brooks). I am almost compelled to view the play again with the alternate cast and enjoy some no doubt new and different elements that they will surely bring to the performances. A wonderful new play with a fabulous soundtrack, revealing very important insights into life as a deaf person in the 1920s. A joyous and emotional piece of theatre, not to be missed.