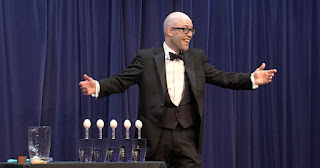 After experiencing the worst of the pandemic, it was time for some magic to lift our spirits. Tonight, I had the opportunity to watch comedy magician, Steve Price. His smile as well as his tricks, did indeed brighten your day. Before the country went into lockdown, Price had been performing on board cruise ships. Now, he has brought his one act magic show into Liverpool for people of all ages to enjoy.

Steve Price is a Gold Star Member of the Inner Magic Circle and his years of experience was evident in tonight’s performance. Price performed visual cabaret magic, skilled sleight of hand, and one-liner comedy. While the comedy wasn’t laugh-out-loud, it was still rib-tickling. Regarding his on-stage persona, he came across as a gentleman and there was a child-like innocence about him – ideal for performing magic. The show is advertised as “primarily for adults” but I feel it was for all ages really, because of the charactersiation and content. His harmless geekiness made the audience feel at ease and entertained. The remembering of audience’s names was a lovely touch. Price’s suit costume matched his character, with the visual hallmarks being his glasses, red shoes, and bow tie.

This 75-minute show was jam-packed with a smorgasbord of magic tricks. There were the classic tricks like, the Torn and Restored Newspaper, Multiplying Balls, and the Egg Bag trick. Add to that the newer illusions such as, the Rubix Cube, Magic Number Square, and the Glass and Water. There was something in the show for everyone. Price adapted his performance of the tricks adeptly for an intimate, close up, and perhaps more exposing setting, in comparison to his stage performances on cruise ships.

The patter for the tricks centered around Price’s personal experiences of magic. It was an insight into the world of magic itself; the time and effort which goes into practising. For most of the tricks (but not all of them) there was an interesting hook to engage you. It could have been a intriguing fact or the exploration of anagrams and numbers or teaching you how to do a trick but the second time around using another method to fool you. The little details like his catchphrase, to building rapport with the audience, to how he sets up the magic moment were the signs of a true professional.

Overall, this evening of magical entertainment completely met your expectations and more. Whether Price was putting his own spin on classic tricks or wowing us with illusions we’d never seen before, there was something in the show for everyone. The material has clearly been tried and tested over the years resulting in a polished and pleasing performance.