BOOK REVIEW: Determined To Stand: The Reinvention Of Bob Dylan 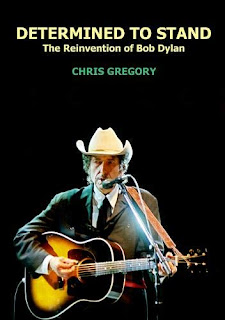 TITLE: Determined To Stand: The Reinvention Of Bob Dylan
AUTHOR: Chris Gregory
PUBLISHER: The Plotted Plain Press
This in-depth commentary, by Chris Gregory outlines the manner in which Dylan has been able to reinvent his art and his persona, from the 1990s onwards, to create a new and unique body of work. He has concentrated on Dylan’s roots in folk, blues, country and gospel music. The main focus is on Dylan’s songs from ‘Time Out Of Mind’ (1997) to ‘Rough And Rowdy Ways’ (2020) and his captivation with the pre rock’n’roll ‘sentimental’ tradition is examined in detail.

The book also brings into context Dylan’s work as an artist and sculptor, a film maker, a writer of prose and a radio show host. Significance is given to how Dylan has continually developed his musical compositions during his ‘Never Ending Tour’ (1988 – present) and his ‘spiritual quest’ for the ‘perfect’ version of each song.  Fans often marvel at how he can change the format of his many hit songs so that they are unrecognisable until the last verse or last lines.

Chris explains that, although Bob Dylan's music of the 1960's and '70's was vastly successful and innovative, by the mid-1980s his creativity had dipped so low that he was seriously thinking of retiring.  What a disaster that would have been for his vast army of fans, should he had done so. The ’90’s songs are messier, but it isn’t quite a “lost” period, although there were far fewer songs in total. ‘Time Out Of Mind’, would prove to be his most widely acclaimed album. It marked Dylan's artistic comeback after he appeared to struggle with his musical identity throughout the 1980s; he had not released any original material for seven years, since ‘Under The Red Sky’ in 1990. ‘Time Out Of Mind’ was hailed as one of Dylan's best albums and went on to win three Grammy Awards, including Album of the Year in 1998. It was also ranked number 410 on Rolling Stone's 500 Greatest Albums of All Time in 2012.

Dylan is the 'Poet Laureate' of rock 'n' roll. He is the voice of the promise of the '60's counter-culture. I remember ‘cos I was there! He is the guy who forced folk into bed with rock, much to the annoyance of some of his fans who called him ‘Judas’. He was almost written off as a has-been by the end of the '80s but unexpectedly shifted gears, releasing some of the strongest music of his career beginning in the late '90s when he began to produce work that was comparable in quality to that of his heyday. The songs reference a vast number of legendary texts, ranging from Ancient Greek classics and the King James Bible to Shakespeare and the Romantic and Symbolist poets. They tell the story of Dylan’s personal battle to regain a connection with his lyrical muse.

Dylan, who turns 80 years' old this month (May 2021), has won the battle of remaining creatively original as well as staying ‘Forever Young’ in all but appearance. He has evolved from the young man of the 1960’s to the experienced showman of 2021. The release of 'Determined To Stand: The Reinvention Of Bob Dylan' written by Chris Gregory, coincides with Dylan becoming an octogenarian.

The first time I saw Dylan, I was entranced. After many concerts of enjoying his music I am still enthralled and amazed at how he can take a song and change it so that at the beginning it is almost unrecognisable until, after a few chords and lines of lyrics, the light dawns and the listener is able to identify it and sing along to it, albeit in its new rendition.  I know of no other musical artistes who do this or do it so well. His passion and enthusiasm bring something new to each performance. I sometimes think he is toying with the audience. He is known for not often smiling but I have often thought I’ve seen the semblance of a smirk when delivering an old favourite in a completely different format to his adoring audience. I have experienced the roar of the crowd when, at the same moment, they have recognised a favourite melody delivered in an altogether different arrangement. He is a master of songwriting and a definitive performer, even with his lack of communication with his audience. He is ‘Mr Cool’ who doesn’t give a damn.