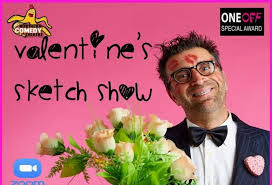 Love conquers all, even a pandemic. Northern Comedy Theatre’s love of the Arts is evident in their dedication to writing and producing new plays throughout 2020 and 2021. Nothing can stop them; the company’s commitment is inspiring. They explore all variations of this healthily infectious thing called love, which is probably the best thing to spread around at the moment. What does platonic and romantic love look like almost 12 months on since the UK first went into lockdown? This was Northern Comedy Theatre’s barmy and feel-good theatrical answer to that question.

David Spicer had edited the script effectively to provide us with a variety of sketches, all directed by Shaun Chambers. This form of theatre was a smart choice because Zoom audiences are more likely to have a shorter attention span. It also gave the ensemble of actors an opportunity to display their versatility through embodying multiple characters. The majority of storylines were broken up into several scenes, jumping from one to another and back again, like a soap opera or the intertwined plotlines of “Love Actually”.

To set the tone and context for the rest of the show, the script opened with the latest address from the Prime Minister on Valentine’s Day arrangements explaining that restrictions such as wearing face masks and social distancing were still compulsory. The company were very much on the nose (pun intended) with their standpoint on how the UK Government has handled the pandemic. Elbow bumping had become the new kissing, it was joked.

Hilarious sketch highlights from tonight’s show included: “The UK’s Most Eligible Singles” featuring a computer maintenance engineer looking to be turned on (not off). Next, a radio DJ had to start his life again from ‘scratch’ after the news his wife cheated on him with a caller on the show’s phone line. Then, a dancer thought to herself: “What’s the pointe?” (another pun), when a Zoom date with her partner was made up of a multitude of misunderstandings.

The main characteristic of this Zoom production, compared with the company’s other plays, was the fact that this was pre-recorded and not live. Theatre is about people watching other people in a live space you could argue, be it physical or virtual. I have to say I missed that element of live performance tonight and the spontaneity which comes with it. I suppose, this way, the company didn’t experience the lag of Zoom as much, and the whole thing could switch from one location to the next with quick changes of costume. However, I still noticed that absence of live performance and the connection with the audience it brings – even over Zoom. Anyway, I can see why they decided to do it for this ever-changing sketch show. I hope to see one of their shows live in person one day. Great work, once again.