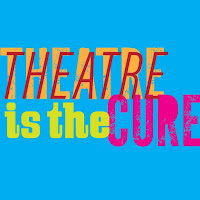 A weekly event organised, presided over, introduced and MC'd by Los Angeles-based actress Hannah Logan. Her affection and enthusiam for these monologues, performed by professional actors in isolation durng lockdown is obvious and sincere.

Each week different actors, directors and writers have their worked shared on this channel, and is available for free worldwide. Obviously it is hoped that those watching will donate to the cause, but more than that it is simply a love for and a need to continue creating that keeps them and many more of us going in these very difficult circumstances.

The writers are given a 'prompt' or a theme upon which to base their writings, and in this, episode 6 of this series, the monologues were all based around the coronavirus pandemic and how we are as individuals coping with isolation.

What was most unfortunate - and something which really in my mind at least needs addressing - is that although Logan credits writers, performers and directors verbally, she keeps apologising for not knowing how to pronounce their names, and there is no written record of them anywhere. These names should be either put up on screen before or after each monologue, or be available on her Facebook page as a cast and creatives list. Hopefully though, since this episode is quite an old one now, this will already be happening. However, I have made a note of some of the names - the ones which I thought I could hear clearly enough to have a stab at writing them down, and so if they are misspelled (and they probably are), please forgive me.

In the 75 minute edition we were shown 12 monologues (36 different creatives!), and the show ended with an original song involving three more creatives too, so this is one massive and undoubtedly full time operation for Logan! However, I cannot mention them all, so instead will focus on just five which drew my attention more than the others for purely aesthetic or personal reasons, not because they were in any way "better" - that is just far too subjective a concept for an endeavour such as this.

The first to pique my interest was a piece titled "Wherever Is Her(e)" and written by Somebody Jones and performed by Hillary Dadio-Perrone. It was a seemingly gentle exploration of her struggles during lockdown being an Amercian in London, and missing the simple things which she takes for granted in the States which aren't the same here. And her first experience of an outing just after quarantine ends, a trip to the beach. There are quite a few levels at play with this monologue and it was effectively delivered by Dadio-Perrone. In a not too dissimilar vein, the second piece was "7pm In New York" by Ashley Lara and performed by Heather Warren. A 20-something female spends her first night in New York under lockdown and this was her somewhat neurotic and metaphoric banging-her-head-against-a-brick-wall virtually as she takes us through New York, roommates, the pandemic, losing jobs, clapping for carers and masturbation!

Following this was 'Eliana' by Elisabeth Speckman and performed by Jennifer Laine Williams. Again another multi-layered and hugely sympethic piece, and again on one level, a very simplistic story of a lady living next door to a foreigner who is over-protective of a rock in his garden. It is obvious this soon becomes a metaphor for the virus and how we respect distance and don't touch now. Very emotive and superbly acted.

The penultimate item in the show was 'Her Own Space' by A K Abeille, but performed by Kay-Megan Washington. A very simple piece, but sometimes the simple ones can be the most effective and have the greatest emotional pull, as here. A young lady lives alone, she likes living alone, she can do what she wants when she wants etc... her space is hers! However she is now telephoning a medical helpline since she has a fever and is obviously concerned. It's a very real moment and could so easily have been a fly-on-the-wall documentary.

And finally the song. Being Musical Theatre trained, and musicals being a part of my life-blood, it would be wrong of me to disregard this. The song was called 'The Lockdown Song' and had lyrics by Bill Nelson and music by Willem Oosthuysen. It was performed by Tara Sampson. With a long introduction by Hannah Logan, it was a neurotic moment of madness about her taking an illegal trip to Disneyland during lockdown. A comment on how isolating due to the virus is sending us all a little stir-crazy and some of us are tipped just a little more over the edge than others...!

Congratulations to all involved, and please do keep up the good work.  we all have had to find ways of diversifying and honing our craft during these dark and uncertain times, and so it is only through opportunities like this we are able to stay "sane"!